A trial led by researchers at Queen Mary University of London into a new device to control blood pressure could transform the lives of people across the world. 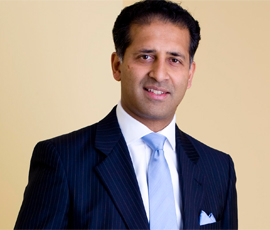 An international clinical trial involving patients in the Barts Hypertension Clinic and the London Chest Hospital – part of Barts Health NHS Trust - is being led by Dr Mel Lobo, Consultant Physician in Cardiovascular Medicine, and a Senior Lecturer at Queen Mary.

His team at the internationally recognised Barts Hypertension Clinic is partnering with ROX Medical to test a new device in the ROX Control Hypertension Study, aimed at significantly improving blood pressure levels in patients with resistant hypertension in whom three or more drugs have failed to achieve blood pressure control.

An estimated 16 million people suffer from high blood pressure in the UK. If left untreated, the condition can have serious health implications - causing around half of all global deaths from stroke and heart disease as well as being a major cause of chronic kidney disease.

Known as the "silent killer", high blood pressure rarely has obvious symptoms and millions of people in the UK and beyond may be unaware they are sufferers.

If successful, the new device could lead to a dramatic reduction in the very high risk of stroke or heart attack that these patients are living with every day.

The trial involves a minimally invasive procedure in which a tube called a catheter is used to place a small device, known as a Rox Coupler, between the artery and vein in the upper leg. The device works by reducing the vascular resistance to blood flow and diverting some arterial blood to the veins.

The intended result is a substantial and permanent reduction in blood pressure. It is also hoped that a reduction in anti-hypertensive drug therapy may be possible.

Dr Mel Lobo said: “This is a very exciting trial, which if successful, has the potential to expand our array of non-drug therapies for resistant or uncontrolled hypertension.

“Unlike renal denervation, which involves irreversibly destroying the nerves supplying the kidneys, this procedure only involves vascular structures remote from vital organs. It is also fully reversible which is a great attraction for patients.

“This procedure may be especially beneficial for those patients whose hypertension has not been controlled through traditional medications and who live in constant fear of a heart attack or stroke.”

He added: “In the long run, though, it could benefit an even wider range of patients with hypertension, and it may even lead to greater understanding of how hypertension arises and is perpetuated. One might even speculate that such treatment may even herald a new era of device-based therapy of hypertension in which patients may ultimately be freed from the need to take anti-hypertensive drugs on a daily basis lifelong.”