Exposure to high levels of aircraft noise is associated with an increased risk of cardiovascular disease, find two studies published on bmj.com today, accompanied by an editorial by Queen Mary University of London’s Professor Stephen Stansfeld. 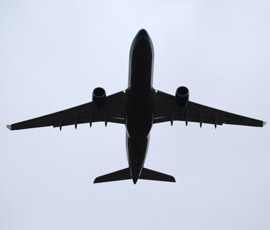 Professor Stansfeld says these studies “provide preliminary evidence that aircraft noise exposure is not just a cause of annoyance, sleep disturbance, and reduced quality of life but may also increase morbidity and mortality from cardiovascular disease”.

He suggests that planners “need to take this into account when extending airports in heavily populated areas or planning new airports”.

Dr Anna Hansell, from Imperial College London, and colleagues in London and Cambridge set out to investigate the risks of stroke and heart disease in relation to aircraft noise among 3.6 million residents living near London Heathrow, one of the busiest airports in the world.

They compared hospital admissions and mortality rates for stroke, coronary heart disease, and cardiovascular disease from 2001-05 in 12 London Boroughs and nine districts west of London. Levels of aircraft noise for each area were obtained from the Civil Aviation Authority (CAA).

Professor Stansfeld explains in the BMJ: “The two new studies are better powered than earlier studies, using advanced statistical methods for area level analyses, adjusting for confounding factors such as air pollution, and including high levels of exposure around Heathrow airport.

The researchers found increased risks of stroke, coronary heart disease, and cardiovascular disease for both hospital admissions and mortality, especially among the 2 per cent of the study population exposed to the highest levels of daytime and night time aircraft noise.

Factors that could have affected the results, such as age, sex, ethnicity, social deprivation, smoking, air pollution, and road traffic noise were also taken into account. Accounting for the prevalence of people of South Asian ethnicity reduced the observed risks for hospital admissions for coronary heart disease and cardiovascular disease.

However, the authors were unable to distinguish between night time and daytime noise and say more research is needed to determine if night time noise that disrupts sleep may be a mechanism underlying these associations.

They stress that further studies are needed to test whether aircraft noise causes these increases in risk or if these results can be explained by some other unmeasured (confounding) factors.

Their aim was to investigate whether exposure to aircraft noise increases the risk of hospitalisation for cardiovascular diseases - and is the first study to analyse a very large population across multiple airports.