Eating vegetables rich in nitrates – such as leafy greens and beetroot – can lower blood pressure in patients with high blood pressure, new research from scientists at Queen Mary, University of London has shown. 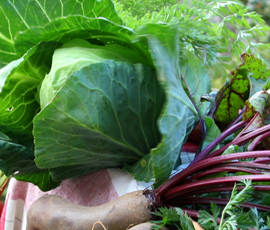 The researchers, funded by the British Heart Foundation (BHF), looked at the effect of consuming nitrate on blood pressure in rats, before confirming their findings in a small study in 15 patients with high blood pressure. The study is published today in American Heart Association journal Hypertension.

High blood pressure leads to a greatly increased risk of suffering a heart attack or stroke and affects around 16 million people in the UK (1), but many are undiagnosed.

The researchers showed that eating healthy amounts of nitrate-rich vegetables – such as a bowl of lettuce, or two beetroots – had a positive effect on blood pressure in the patients for 24 hours. Patients given this level of nitrate in their diet had an average 11.2 mmHg drop in their blood pressure levels from baseline.

Nitrate is a chemical found naturally in soil, which vegetables take in through their roots to help them grow. It could lower blood pressure by being converted to a gas called nitric oxide, which has a relaxing effect on blood vessels.

Amrita Ahluwalia, Professor of Vascular Pharmacology at the William Harvey Research Institute, part of Queen Mary, who led the research, said: “We found that just one high-nitrate meal can lead to an improvement in patients with high blood pressure, which was very encouraging. We used beetroot juice, but any other high-nitrate vegetable such as cabbage, lettuce or fennel would have had the same effect.”

The study involved eight women and seven men who had high blood pressure (a systolic blood pressure between 140 to 159mm Hg), but did not have other medical complications and were not taking blood pressure medication. The participants drank 250 mL of beetroot juice or water containing a low amount of nitrate, and had their blood pressure monitored over the next 24 hours.

Compared with the placebo group, participants drinking beetroot juice had reduced blood pressure. The effect was most pronounced three to six hours after drinking the juice but still present 24 hours later.

Professor Ahluwalia added: “Our hope is that increasing one’s intake of vegetables with a high dietary nitrate content, such as green leafy vegetables or beetroot, might be a lifestyle approach that one could easily employ to improve cardiovascular health.

“However, while we’re encouraged by our discovery, our study was small and we only followed patients for one day. It’s essential to carry out larger studies, over longer periods of time, before we can be sure nitrates really are such good news for people with high blood pressure.”

Professor Peter Weissberg, Medical Director at the BHF, which funded the study, said: “This promising study shows that it may be possible to reduce high blood pressure by eating more foods that contain large quantities of nitrates, such as green vegetables and beetroot. It supports current advice that we should all be eating plenty of green veg. But we need larger studies in patients to determine if nitrate-rich vegetables are effective at lowering blood pressure over the long term.”