New research from Queen Mary University of London has revealed, for the first time, the molecule αvβ6 (alpha v beta 6) could tell doctors which cases of Ductal Carcinoma in Situ (DCIS), a condition where non-invasive cancerous cells are contained within the milk ducts of the breast, are most likely to develop into early ‘invasive’ breast cancer. 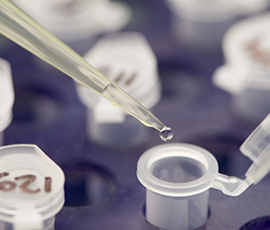 Around 4,800 cases of DCIS are diagnosed each year in the UK, with two thirds diagnosed through breast screening. If left untreated, up to half of DCIS cases could progress into invasive breast cancer but it is not possible to say which ones. This means all women are offered treatment and faced with the difficult decision of whether to have it or not.

The study, funded by Breast Cancer Campaign, indicates with further research αvβ6 could be used to stratify patient treatment, meaning a significant proportion of the 4,800 women diagnosed with DCIS each year in the UK could avoid unnecessary procedures. This would mean a reduction in the number of women requiring surgery and other treatments such as radiotherapy, addressing the issue of over-diagnosis and over-treatment of the condition.

Researchers looked at 583 breast tissue samples from normal breasts and those with DCIS, and showed there to be a link between levels of αvβ6 in myoepithelial cells (cells which form part of the milk duct walls) and whether breast tissue was normal, had DCIS or had progressed to invasive breast cancer.  There was almost no αvβ6 in cells from normal tissues, whereas over half of the DCIS cases had αvβ6 in the surrounding cells (52% of non-high grade DCIS and 69% of high grade DCIS) and nearly all DCIS cases that had already started to become invasive breast cancer had αvβ6[1].

The researchers then looked at a further 104 cases of DCIS matched to long term follow up information on each woman and found that the levels of αvβ6 in patients’ myoepithelial cells were strongly associated with their DCIS recurring or progressing, and this effect was seen independently of the grade and size of the DCIS.

Women whose myoepithelial cells contained αvβ6 saw their disease recur around nine years earlier than those without αvβ6; cases with αvβ6 recurred in an average of 2.3 years compared to 11.4 years for those without αvβ6.

“We are confident these results will be validated in further studies and from there we don’t envisage any barriers to this research resulting in the development of a routine test which could take place in the clinic. This will be a huge step forward in how we treat women with DCIS. Our ultimate goal is that women diagnosed with DCIS without αvβ6 could be offered active monitoring, saving them from potentially unnecessary surgery and radiotherapy.”

Further experiments using cell and mouse models showed that αvβ6 encouraged breast cancer cells to spread out and grow much faster. They also revealed that αvβ6 is dependent on two other proteins to promote cancer growth, TGFβ and MMP9, and with further research these could potentially be targeted with drugs to prevent DCIS from progressing.

“These findings show that we are really starting to find some clarity in the grey areas surrounding the subject of DCIS, and interestingly this insight has come from specialised cells which surround the DCIS, rather than the cancer cells themselves. There is still much more we need to do, but we have found some important correlations between the presence of the marker, αvβ6, and the progression of DCIS into invasive breast cancer, and that is very exciting.”