A unique housing scheme set up by students at Queen Mary University of London’s medical school, to provide student accommodation in east London alongside senior citizens in need of support, celebrated its 25th anniversary this week. 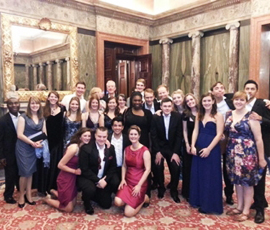 The Griffin Community Trust was created in 1988 by medical students of the London Hospital Medical College - now Barts and the London School of Medicine and Dentistry, part of Queen Mary - to raise enough money for a philanthropic project where students would live alongside older local residents, providing friendship and support.

After raising some £1m, Griffin House in Poplar was opened in February 1998 by HRH the Princess Royal, providing six self-contained flats for students and a community centre, adjacent to Shaftsbury Lodge sheltered housing for senior citizens.

In return for a reasonable rent, students are asked to befriend their elderly neighbours, through weekly house visits and monthly social events, including bingo nights, flower arranging evenings, cooking demonstrations, theatre trips, Christmas dinner in a local restaurant, a yearly trip for tea at the Dorchester and an annual garden party.

“The enthusiasm and dedication of the students is palpable and the enjoyment of their older neighbours is clear to see,” comments Dr Veronica White of Barts Health NHS Trust, Chairman of the Griffin Community Trust.

Dr White adds: “In 1988 we thought it was a great idea, but none of us imagined that in its small way the project would be so successful and that both students and senior citizens alike would we would have so much to gain from mutual companionship.”