Leading research institutions and hospitals across London, including Queen Mary, University of London, have united to transform lung cancer care with plans to invite patients over a population of six million into a pioneering new programme of clinical trials. 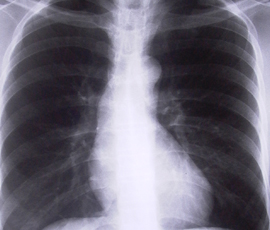 The initiative is being backed by the Mayor of London, Boris Johnson, and by England’s Chief Medical Officer, Professor Dame Sally C Davies.

The launch of the London Lung Cancer Alliance aims to deliver dramatic benefits for patients in London, nationally and worldwide – through collaboration, coordination and an ambition to give every patient access to a trial suitable for them.

Member organisations plan a programme of research that will ultimately make trials of cutting-edge personalised therapies available to up to 3,000 patients a year newly diagnosed with lung cancer across the capital.

Lung cancer is the second most commonly diagnosed cancer in the UK after breast cancer, with 42,000 new cases in 2010. Survival rates in the UK are distressingly low and worse than across much of Europe – less than 10 per cent of patients are still alive five years after diagnosis.

Patients with lung cancer across London will be included in the unique research programme, which will cover the entire lung cancer pathway from the identification and screening of those at risk through to end-stage disease. The London Lung Cancer Alliance will also link up with five other cities across the UK.

Researchers will genetically profile tumours and test a panel of targeted therapies – many previously untried in lung cancer - in those with particular molecular defects. They will also develop ‘liquid biopsy’ blood tests for patients who are too ill to biopsy, or to monitor whether drugs are working and assess for signs of resistance.

Under the plans, all patients within a six-million catchment area in London, along with those in Newcastle, Southampton, Liverpool, Cardiff and Edinburgh, will eventually be offered gene testing of their cancers at diagnosis. As many patients as possible will then be offered one of a panel of targeted therapies matched to their cancer’s particular molecular defects.

Professor Alan Ashworth, Chair of the London Lung Cancer Alliance and Chief Executive of The Institute of Cancer Research, said: “For far too long the prospects for patients with lung cancer have been bleak. But now we have an opportunity to change that as new genetic techniques for studying tumours open up the prospect of trialling novel targeted therapies for lung cancer.

“The London Lung Cancer Alliance has brought together leading organisations across London with the aim of applying state-of-the-art technology to radically shake up the way we treat lung cancer. We believe that this new alliance will genuinely improve the prospects for lung cancer patients.”

Dr Tyson Sharp, Non-Clinical Senior Lecturer at Queen Mary, University of London, said: “Here at Barts Cancer Institute we combine both basic molecular biology and clinical research to advance our understanding and treatment of many different types of cancer.

“My group’s specific interest is in the early events that initiate lung cancer and the use of novel genetic targets to develop tumour-specific and patient-specific therapies. Our molecular and cell biology research and model system of disease development fit perfectly with the overarching strategy of the Alliance and in so doing will also significantly benefit patient health through access to the six million patients available in this exciting new initiative.”