Her Majesty The Queen is to open a new national research centre for bowel disease and surgical innovation  based at Queen Mary, University of London on Wednesday, 27 February 2013. 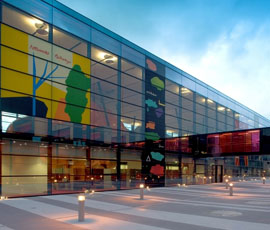 The Blizard Institute at Queen Mary, University of London

The £3m National Centre for Bowel Research and Surgical Innovation (NCBRSI) was set up to help bring bowel disease – a neglected area of medicine – to the forefront of scientific and surgical innovation. It is based at Barts and The London School of Medicine and Dentistry, part of Queen Mary and supported by the charity Bowel & Cancer Research, which raised more than £2.5m towards the cost of setting up the centre. Other funding came from the Wolfson Foundation and Barts and The London Charity

The Queen, accompanied by The Duke of Edinburgh, will meet some of the 30 clinicians and scientists involved in groundbreaking research into bowel disorders including cancer, colitis, faecal incontinence and constipation which affect millions of people in the UK.

They will visit the state-of-the-art laboratory dedicated to the study of human tissue from surgical patients, the first of its kind in the world, and will see research in action.

Diseases of the gastro-intestinal tract, or gut, account for one-in-six hospital admissions in the UK and are the third most common cause of death. Each year more than 41,000 people are diagnosed with bowel cancer in the UK and 16,000 die from it, making it the nation’s second biggest cancer killer after lung cancer.

The National Centre, which became operational in March 2012, has brought together scientists, surgeons and industry, providing them with a first-class facility to enable breakthroughs in the understanding and treatment of bowel disease. It is also intended to revolutionise the uptake of surgical innovation in this area into the NHS and provide a model for other disciplines.

Professor Norman Williams, Director of the NCBRSI and President of the Royal College of Surgeons said: “Before this centre was set up there was no recognised mechanism for developing an idea about innovative surgery for bowel disease, taking it through to clinical trial, and into routine clinical practice. As a result, new techniques to help patients have tended to come about more by luck than strategy.

“By pooling expertise from different sectors of the medical chain including the medical devices sector, and this Centre will provide the organisation and a structure to make that happen.”

Despite its prevalence, Charles Knowles, Professor of Surgical Research and a co-director of the NCBRSI, said bowel disease has been a “neglected area of medicine”.

Professor Knowles said: “Despite the huge number of bowel disease sufferers, scientific research into bowel disorders has one of the poorest ratios of investment when compared with the burden of disease. Technical surgical trials are few and far between.

“Our state-of-the-art human tissue laboratory is already generating exciting results and is a prime example of collaboration in practice: tissues taken from surgical patients at the Royal London Hospital in the morning are being used in experiments in the afternoon.”

Professor Mike Curtis, Director of Queen Mary’s Blizard Institute, where the NCBRSI is based, said: “The development of high-quality facilities, specifically designed for research using human tissues is part of a larger strategic initiative to focus our efforts on patient-centred research.

“We thank all those who have supported the creation of this centre and look forward to working together as we progress in the development of new approaches to the prevention and control of bowel disease.”

Deborah Gilbert, Chief Executive of Bowel & Cancer Research, said: “We are delighted that The Queen is to open the NCBRSI.

“Our charity’s aim is to ensure that no one should die of bowel cancer, have to live with chronic bowel disease, or face life with a permanent stoma. Her Majesty’s visit will help us combat one of our biggest obstacles - that bowel disease is a taboo subject.  Talking about it really does save lives.”