Taking the breast cancer drug anastrozole for five years reduced the chances of post-menopausal women at high risk of breast cancer developing the disease by 53 per cent compared with women who took a placebo, according to a study published in the Lancet today. 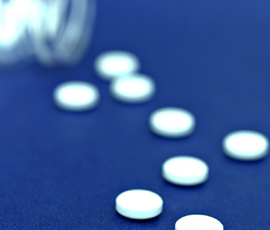 The results of the IBIS II trial, funded by Cancer Research UK and led by Queen Mary University of London, could offer a new option for preventing breast cancer in high risk post-menopausal women which is more effective than tamoxifen and has fewer side-effects.

The study looked at almost 4,000 postmenopausal women at high risk of breast cancer with half being given 1mg of anastrozole daily and half given a placebo. In the five years of follow up 40 women in the anastrozole group developed breast cancer compared to 85 women  placebo group.

Professor Jack Cuzick, lead researcher and head of Queen Mary University of London’s Centre for Cancer Prevention, said: “This research is an exciting development in breast cancer prevention.  We now know anastrozole should be the drug of choice when it comes to reducing the risk of breast cancer in postmenopausal women with a family history or other risk factors for the disease. This class of drugs is more effective than previous drugs such as tamoxifen and crucially, it has fewer side effects.

“Unpleasant side effects such as acute aches and pains have often been associated with oestrogen depriving drugs. However, in this study, the reported side effects were only slightly higher than in the placebo arm. This means most symptoms were not drug related, and the concern about side effects for this type of drug may have been overstated in the past.

“Our priority now is ensuring that as many women as possible can benefit from these new findings. Prevention is an important tool in the fight against breast cancer and we strongly urge the National Institute for Health and Care Excellence (NICE) to consider adding anastrozole to their recommended drugs for women who are predisposed to developing breast cancer. By including this drug in their clinical guidelines, more women will benefit from this important advancement in preventive medicine.”

Many breast cancers are fuelled by the hormone oestrogen. Anastrozole works by preventing the body from making oestrogen and has for many years been used to treat postmenopausal women with oestrogen receptor positive breast cancer.

Kate Law, director of clinical research at Cancer Research UK, said: “This landmark study shows that anastrozole could be valuable in helping to prevent breast cancer in women at higher than average risk of disease. We now need accurate tests that will predict which women will most benefit from anastrozole and those who will have the fewest side-effects.”

Dr Harpal Kumar, Cancer Research UK’s chief executive, said: “Cancer Research UK has been funding the IBIS II trial for more than 10 years. We’re delighted that the results will now offer women at high risk of breast cancer a new option to significantly reduce their chance of developing the disease. By supporting large trials such as this, which take a long time to complete, we can make discoveries that will help us to save many more lives in the future.”