A dental student from Queen Mary, University of London has taken first prize in a national competition, winning a trip to New Orleans and £10,000 for the Institute of Dentistry. 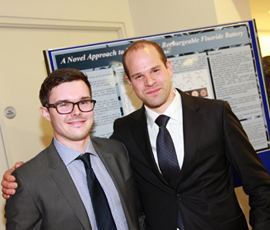 Mark Franks won a British Dental Association (BDA) / Dentsply Student Clinician Award on Thursday 21 March 2013, for his presentation “A novel approach to designing a rechargeable fluoride battery”. The research revolves around the design of a device that can provide a slow constant release of fluoride at the tooth surface.

As the national winner, Mark Franks will be invited to the American Dental Association meeting in New Orleans this October as an honoured guest of the dental supply company Dentsply.

While competition rules state that only one applicant from each dental school apply, the work was a collaborative effort with undergraduate Corwin Ezra Hine, with contributions and support from Dr Mangala Patel, Professor Robert Hill, Dr Sandra Parker and Dr Natalia Karphukina.

Speaking of his presentation Mark said: “It was fantastic to be announced overall winner and was far beyond my expectations. Corwin and I are both current third year dental students, which leaves us two more years to further develop this research. It will be exciting to see where it goes from here.”

The Institute of Dentistry at Barts and the London School of Medicine and Dentistry, part of Queen Mary, will receive a £10,000 research grant to support further undergraduate research projects.

Professor Rob Allaker acts as the BDA/Dentsply Student Clinician Research Awards Representative and helps to ensure that research is embedded within the new BDS curriculum. He says: “It is a fantastic achievement that Queen Mary has been awarded first prize when faced with such fierce competition. The concept behind a rechargeable material that can deliver fluoride is extremely innovative and should find a use in a wide range of dental applications.”

The BDA competition is now in its 36th year, with participants presenting original research on a national stage to four distinguished adjudicators and key figures in the dental profession.

In last year’s awards, Queen Mary student Jonathan Lewney took second prize for his investigation into the demineralisation of teeth.