Pioneering research led by Queen Mary, University of London that has the potential to reduce the number of animals used in medical research of the human digestive system has been commended in a prestigious international awards scheme. 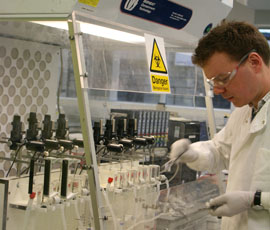 Dr John Broad, co-author on the commended paper, conducts research at the National Centre for Bowel Research and Surgical Innovation

Gareth Sanger, professor of neuropharmacology at Queen Mary, was one of three commended runners-up in The National Centre for the Replacement, Refinement and Reduction of Animals in Research (NC3Rs) annual 3Rs Prize announced today (26 February). The awards recognise the most promising scientific advances and technological developments to replace, reduce or refine the use of animals in research and testing.

In their paper, published in the British Journal of Pharmacology, Professor Sanger, together with Dr John Broad and colleagues, demonstrated how human gastrointestinal tissues can be used as effectively as animal tissues to test new therapies for gut problems in the laboratory.

Until now the validity of research carried out using human gastrointestinal tissue in the laboratory has been questioned, often because studies have been limited to small sample sizes. To control for variables such as age, gender, lifestyle, and get reliable results, large sample sizes are needed and the infrastructure has not previously been in place to gather these.

However, Professor Sanger, working with Professor Charles Knowles and colleagues at the National Centre for Bowel Research and Surgical Innovation at Queen Mary have put in place systems which allow large numbers of patients to be approached before surgery to give permission for samples of their tissue, removed as a routine part of surgery, to be used in research.

In this particular study, working in collaboration with surgical teams at The Royal London Hospital, Whipps Cross Hospital and Homerton Hospital, they were able to get samples from 71 patients – enough to produce reliable and clinically-relevant results.

Professor Sanger said: “This kind of work involves close collaboration with the surgical and pathology teams and, as the tissues need to be used live, we have to be prepared to collect the samples at whatever time they become available. But we have shown now what can be achieved and have already gone on from this to carry out further human tissue studies.

“I hope this will urge others to recognise the potential alternatives to animal research, particularly when the animals concerned are derived from highly inbred strains with unproven relevance to humans or the diseases are ones which can’t be modelled in animals.”

Dr Vicky Robinson, CEO, NC3Rs , said: “There is a demand for more physiologically relevant approaches to research and testing that don’t involve animals. Professor Sanger’s work demonstrates the clinical relevance of human tissue for gastrointestinal research and draws further attention to the need to explore the availability of this resource from surgical procedures.

“We commended this research because it represents a culture shift in how scientists are designing their experiments, as well as avoiding the use of up to 560 rodents in this study.”