Rescue me: new study finds animals do recover from neglect

Animal sanctuaries can play an important role in rehabilitating goats and other animals that have suffered from neglect, according to scientists at Queen Mary, University of London. 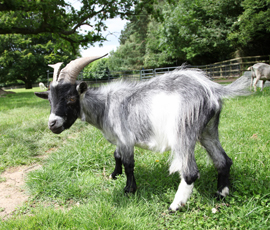 In this first scientific study of rescued animals, the researchers examined moods in 18 goats, nine of which had endured poor welfare, such as inappropriate diet, and lack of space or shelter before arriving at a sanctuary. They created a spatial awareness test, which involved giving the animals an opportunity to look for food, to understand the link between poor welfare and the goats’ mental health, by comparing the behaviour of the mistreated goats with that of the goats that had been generally well treated.

The scientists observed whether some goats were faster to explore specific areas that resulted in the reward of food and others that did not. They assessed how the goats judged previously unknown locations, described as ambiguous because they were situated between spaces known to contain food and areas without food.

Watch a video of the test.

“Mood can have a huge influence on how the brain processes information. In humans, for example, it’s well known that people in positive moods have an optimistic outlook on life, which means they are more resilient to stress. In the same way, measures of optimism and pessimism can provide indicators for an understanding of animal welfare,” explains co-author Dr Elodie Briefer from Queen Mary’s School of Biological and Chemical Sciences.

It was thought that the goats from the poor welfare group would be more ‘pessimistic’ and slower than the well-treated goats to explore ambiguous locations for food, where the promise of reward was not guaranteed. However, a surprising result of the study was that female goats that had been mistreated in the past were more optimistic than the other well-treated female goats.

Dr Briefer adds: “In this case, we found that female goats that had been previously neglected were the most optimistic of all the tested animals. They were more optimistic than well-treated females, but also the poorly treated males. This suggests that females may be better at recovering from neglect when released from stress, and might have implications for animal sanctuaries in how they tailor the care they provide for the different sexes.”

Dr Alan McElligott, also from Queen Mary’s School of Biological and Chemical Sciences, said: “The study shows that animal rescue centres, such as Buttercups Sanctuary for Goats, where we collected our data, can provide a vital role in reversing long-term neglect once the animals receive excellent care.”