The first graduation ceremony of 2013 for students at Queen Mary, University of London took place in China on Thursday 27 June. 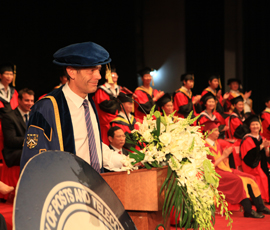 Over 450 undergraduates on a pioneering joint programme run by the College with China’s best telecommunications-specialist university received their dual degrees in Beijing.

The students, based at the Beijing University of Post and Telecommunications (BUPT), and taught equally over four years by academics from BUPT and Queen Mary, have graduated from one of two degrees: BSc Engineering and Management and BSc e-Commerce Engineering with Law.

Principal of Queen Mary, Professor Simon Gaskell, who addressed the graduates in Beijing on Thursday, said: Queen Mary is proud of its partnership with BUPT. Now in its ninth year, the joint programme utilises first-rate training facilities and combines Chinese and British expertise in mathematics and engineering, with a focus on rigorous analytical and communication skills. Its students benefit from the best attributes of two different international education models, and are taught in English, meaning they are highly-prized as employees in the global telecommunications industry.”

This year 376 of the joint programme graduates will progress to postgraduate study, with 80 per cent going to prestigious universities around the world, including Queen Mary, the University of Cambridge and the University of Melbourne. Another 15 per cent are going straight into employment. 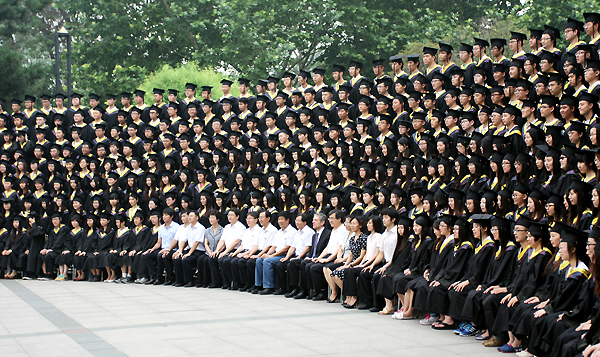 Some 93 per cent of this year’s graduates were awarded a 2:1 or above in their degree, including 117 (26 per cent) who received a First. Almost 200 have received top scores in their final-year projects, including Tong Ge, who was not only awarded full marks and highly commended by her supervisor and marking panel, she was named an outstanding student by the Institution of Engineering and Technology - the largest professional body for the industry in the world.

Queen Mary has worked in partnership with BUPT since 2004 and now offers a growing provision of joint programmes in telecommunications, systems and networks, including a BSc Internet of Things. This course focuses on networked devices, such as household appliances, that can communicate amongst themselves to operate. Originally for Chinese students, the programmes will be open to students from around the world in 2014.