The evolution of similar traits in different species, a process known as convergent evolution, is widespread not only at the physical level, but also at the genetic level, according to new research led by scientists at Queen Mary University of London and published in Nature this week. 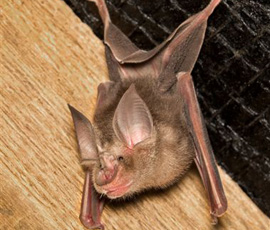 The scientists investigated the genomic basis for echolocation, one of the most well-known examples of convergent evolution to examine the frequency of the process at a genomic level.

Echolocation is a complex physical trait that involves the production, reception and auditory processing of ultrasonic pulses for detecting unseen obstacles or tracking down prey, and has evolved separately in different groups of bats and cetaceans (including dolphins).

The scientists carried out one of the largest genome-wide surveys of its type to discover the extent to which convergent evolution of a physical feature involves the same genes.

They compared genomic sequences of 22 mammals, including the genomes of bats and dolphins, which independently evolved echolocation, and found genetic signatures consistent with convergence in nearly 200 different genomic regions concentrated in several ‘hearing genes’.

To perform the analysis, the team had to sift through millions of letters of genetic code using a computer program developed to calculate the probability of convergent changes occurring by chance, so they could reliably identify ‘odd-man-out’ genes.

They used a supercomputer at Queen Mary’s School of Physics and Astronomy (GridPP High Throughput Cluster) to carry out the survey.

Consistent with an involvement in echolocation, signs of convergence among bats and the bottlenose dolphin were seen in many genes previously implicated in hearing or deafness.

“We had expected to find identical changes in maybe a dozen or so genes but to see nearly 200 is incredible,” explains Dr Joe Parker, from Queen Mary's School of Biological and Chemical Sciences and first author on the paper.

“We know natural selection is a potent driver of gene sequence evolution, but identifying so many examples where it produces nearly identical results in the genetic sequences of totally unrelated animals is astonishing.”

Dr. Georgia Tsagkogeorga, who undertook the assembly of the new genome data for this study, added: “We found that molecular signals of convergence were widespread, and were seen in many genes across the genome. It greatly adds to our understanding of genome evolution.”

Group leader, Dr Stephen Rossiter, said: “These results could be the tip of the iceberg. As the genomes of more species are sequenced and studied, we may well see other striking cases of convergent adaptations being driven by identical genetic changes.”