Scientists from Queen Mary, University of London will be asking visitors at the Royal Society Summer Science Exhibition to perform a simple computer task to test their impulsivity as part of the exhibit ‘Are you more impulsive than a fish?'. 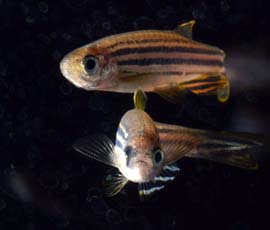 The Queen Mary exhibit will explain how zebrafish, a commonly found tropical freshwater fish, can give insight into the genes associated with particular psychological diseases, including addiction.

Zebrafish share many genetic characteristics with mammals and can help us understand how genes govern behaviour and influence our likelihood to be affected by behavioural issues. To do this, the scientists recorded a group of genetically modified zebrafish performing simple learning tasks to uncover genes that control behaviour. By using this approach the scientists have discovered a mutation that increases drug-seeking behaviour in fish. Variations in the same gene in humans are associated with increased smoking and difficulty in giving up.

Dr Caroline Brennan from Queen Mary’s School of Biological and Chemical Sciences, said: “Everyone is fascinated by the idea that their genes govern their behaviour and may influence the likelihood of suffering from a psychological illness. Research into zebrafish can help identify genes that control disease-related behaviour such as drug-seeking. If we can identify the gene variations that affect behaviour and how they work, we may not only be able to predict an individual’s susceptibility to psychological disease, but also perhaps their responses to different treatment therapies.”

Visitors at the Royal Society will have the chance to observe a fish version of a five-choice serial reaction time test, which is traditionally used to assess impulsive action in rodents. The researchers train the fish to approach a light in one of five compartments for food.

Once the fish have learnt the task and get it right most of the time, the researchers probe impulsivity by increasing the time delay between the test starting and turning on the light. If the fish regularly makes its choice before the light comes on, it is more impulsive.

Dr Brennan added: “My team are excited to be included in this year’s Royal Society Summer Exhibition and look forward to sharing our research with the public.”

The researchers are presenting their research at the Royal Society’s annual Summer Science Exhibition which opens to the public officially tomorrow (Tuesday 2 July 2013) and runs until Sunday 7 July.