A digital media lecturer at Queen Mary, University of London is raising money through the crowd-funding site Kickstarter to manufacture new touch sensors for piano-style keyboards that allow players to transform the sounds of the notes. 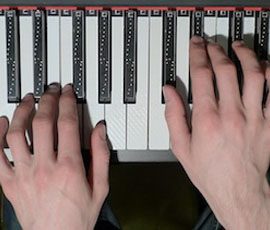 The sensors, called TouchKeys, can be added to the surface of the keys if the pianist is confident enough to hack their keyboard through a DIY- installation kit. Other options available are limited-edition prebuilt keyboards, with sets in four sizes ranging from 25 to 88 keys.

“Traditionally, techniques like vibrato, pitch bends and timbre changes have been awkward on the keyboard – players have to resort to clumsy wheels and pedals to emulate them,” said Dr Andrew McPherson, from the Centre for Digital Music in the School of Electronic Engineering and Computer Science.

“The sensors use technology similar to what's found in smartphone screens and measure the position of the player's fingers on the surface of the key. It gives the player greater control over every note just by moving the fingers around on the key surfaces.”

The pitch can be changed (vibrato) by shaking the wrist back and forth. Pitch bends, timbre or volume changes can be played by moving the fingers up and down. The keys sense up to three simultaneous touches and offer musicians new ways of controlling the sound of each note in real time.

Because of the ease of changing pitch and timbre, the TouchKeys can emulate string and wind instruments more effectively than traditional keyboards. Studio musicians and live bands might find it useful to play a wide variety of instrument sounds. It will also allow performers and composers to develop new sounds and instruments controlled easily from the keyboard.

Dr McPherson added: “I’m really excited about bringing TouchKeys to the wider music community. Producing TouchKeys sets requires an economy of scale. The hardware and assembly come down in price the more units that are ordered. Kickstarter is the perfect fundraising tool since it requires a minimum pledge level before the project is funded.

“This means that if the project is successful, we are assured sufficient funding to economically build and distribute the kits.”

The TouchKeys are the product of over two years of research, beginning at the Music Entertainment Technology Laboratory at Drexel University in 2011 and continuing at Queen Mary following Dr McPherson’s appointment as Lecturer in September 2011.

Previous creations from Andrew McPherson and the Centre for Digital Music include the magnetic resonator piano which has been used by the band These New Puritans in the album Field of Reeds.

The TouchKeys Kickstarter project is launched today (Monday 29 July) and closes at 11:59pm BST on Monday 2nd September. The fundraising target is £30,000.