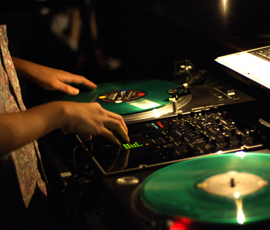 MixGenius uses computer algorithms, created at Queen Mary’s Centre for Digital Music (part of the School of Electronic Engineering and Computer Science) that work in real-time to distinguish between multiple sounds either from a live gig or during post-production, and creates a professional quality mix with an optimised blend of the sounds.

“The software is quick to learn and adapt to the way a musician plays their music,” says Dr Josh Reiss, board member and co-founder of MixGenius, as well as Head of Audio Engineering at the Centre for Digital Music.

“MixGenius empowers the musicians and gives them the freedom to be creative rather than becoming preoccupied with mixing desks and sound levels.”

Dr Reiss adds: “Over the last seven years we’ve performed numerous listening tests to understand what listeners regard as good sound, observed sound engineers at gigs and in the studio, and exploited machine learning and multi-track signal processing to build our software.”

Songwriter and producer, Zuberi Mackson also known as “Young @ud!o” was a tester of the early beta version of MixGenius and suggests ‘it’s the software that music producers have been waiting for’.

He says: "Musicians can find the technical aspects of mixing and mastering staggering within the creative process. I believe MixGenius will eliminate that problem."

Hear the result of their collaboration

CEO Pascal Pilon explains further: “MixGenius has the potential to change the music landscape. There are millions of bands or part-time musicians over the world and our software can help them sound the very best they can with ease and at very low cost.”

The financial boost from venture capitalists based in Canada has helped to grow the company – there are now 10 staff based in their new offices in Montreal, including a graduate from Queen Mary2 and a PhD student3 who is an intern with the firm.

The research from Queen Mary was originally supported by Queen Mary Innovation Ltd; TandemLaunch, which acts as an incubator for early-stage technologies; an Enterprise Fellowship from the Royal Academy of Engineering and a grant from the European Commission called DigiBIC.