Queen Mary’s School of Biological and Chemical Sciences (SBCS) is the recipient of the University’s first ever Silver level award in the latest round of the Athena SWAN Charter awards, which recognises excellence in recruiting and progressing women in Science, Technology, Engineering, Mathematics and Medicine (STEMM). 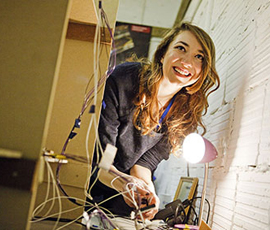 Queen Mary’s School of Mathematical Sciences and Barts and The London School of Medicine and Dentistry have also received Bronze awards for the first time.

SBCS was recognised for developing actions to address gender equality challenges. These include post-doctoral support while researchers are on and returning from maternity leave, a gender equality policy for speakers, and implementation of mentoring and recruitment practices to ensure all staff can progress their careers.

The School of Medicine and Dentistry was noted for its mentoring programme for female academics and the School of Mathematical Sciences has developed an extensive outreach programme, partly delivered by female role models to increase the take up of maths at school.

“We are committed to supporting all of our staff and to ensuring they can develop their careers at Queen Mary, and this is clearly evidenced by three new departments receiving awards in this latest round,” said Professor Jeremy Kilburn, Chair of Queen Mary’s Athena SWAN committee and Vice-Principal for Science and Engineering.

“Achieving an Athena SWAN Silver award is an impressive achievement and recognition of how far the School of Biological and Chemical Sciences has come in the last few years, leading the way for Queen Mary as a whole.”

Bertille Calinaud, Diversity Manager and Athena SWAN project manager in Queen Mary's Human Resources department, said: “I am extremely pleased of our latest achievements in Athena SWAN awards; our schools have all worked very hard to put forward a number of actions and activities to advance gender equality in their areas.”

All five Schools in Queen Mary’s Faculty of Science and Engineering have been recognised for improving career prospects for women and for advancing gender equality. The Schools of Electronic Engineering and Computer Sciences and Engineering and Materials Science are current Bronze award holders (Athena SWAN), and the School of Physics and Astronomy has Juno Practitioner status given by the Institute of Physics for its recognition in addressing under-representation of women and encouraging better practice for both genders.

The Athena SWAN programme is run by the Equality Challenge Unit* to advance women's careers and promote equality in science, engineering and medicine.

Queen Mary currently holds a bronze award for its achievement.