A new study provides the first evidence of polyandry – when females choose to mate with more than one male – in female fallow deer. 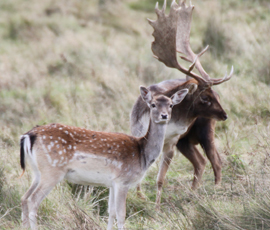 According to a team of scientists from Queen Mary, University of London, UWE Hartpury, and University College Dublin, female fallow deer play an active role in selecting their mates, with a consistent proportion (on average 12 per cent) choosing to mate with multiple males each year.

“Until now there has been limited understanding of female mate choice during this process, with many people believing that female deer are controlled by males during the mating season, explains co-author Dr Alan McElligott from Queen Mary’s School of Biological and Chemical Sciences.

“In fact, not only do females decide with whom they mate, but our study has shown that a proportion choose to mate more than once each year, and with different males. Traditionally most research of this type has focused on male deer mating strategies and female behaviour during the rut was often overlooked.”

The research was carried out on a herd of fallow deer in Dublin’s Phoenix Park over a 10-year period.

Dr Elodie Briefer, also from Queen Mary’s School of Biological Sciences, said: “While the majority of female deer only mated once, we found that 5-20 per cent of the female fallow deer population mated with multiple males over the 10-year period. We believe that the presence of polyandrous females each year in the population is very good evidence of female fallow deer adopting different mating strategies.”

The researchers suggest that the most likely explanation for polyandry in female fallow deer is to ensure that they become pregnant. For example, they observed that the female deer were more likely to mate again if their first mate was relatively old, or he had mated many times before, potentially indicating sperm depletion.

Dr Mary Farrell from UWE Hartpury commented: “The timing of breeding is driven by the best time for offspring to be born. If a female is not fertilised during the first breeding season, she will come back into oestrous three weeks later. This causes a delay in the birth of the fawn, which can reduce its chances of survival.”

The research was published in the journal Behavioral Ecology and Sociobiology today (Wednesday 30 January).