Digital Music experts at Queen Mary, University of London have joined forces with the world-renowned London Chamber Orchestra (LCO) for a concert merging contemporary and classical music with science and technology. 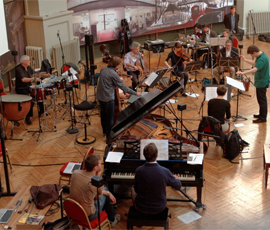 Inspired by Digital on Friday 17th May takes place at London’s newest concert venue, Cadogan Hall in Chelsea, in the hour (6-7pm) before the LCO performs a more traditional all-Beethoven programme.

Five compositions have been created following a study day and workshops between Queen Mary’s world-leading Centre for Digital Music (C4DM) and the LCO and will receive their world premieres at the event - the culmination of the orchestra’s LCO New Explore series. All pieces have been written specifically for the LCO and integrate cutting-edge technologies created by Queen Mary’s digital music research group, including Andrew McPherson’s Magnetic Resonator Piano and Andrew Robertson’s B-Keeper device.

The performance celebrates the LCO’s residency at Queen Mary, and sees the distinguished orchestra and C4DM forging new connections between new young composers, performers, and listeners through state-of-the-art technologies.

Entry to the concert is free but must be booked through: http://www.lco.co.uk/education/lco-new/concert-performance

Inspired by Digital is supported by Queen Mary’s Centre for Public Engagement and by C4DM’s Engineering and Physical Sciences Research Council Platform Grant.

A workshop day on Tuesday 23 April was open to the public, staff and students, to watch the composition process as it happened. Pictures can be viewed on the London Chamber Orchestra’s website.

Untempered by the Hand of Man - James Moriarty