A nanoparticle shaped like a spiky ball, with magnetic properties, has been uncovered in a new method of synthesising carbon nanotubes by physicists at Queen Mary University of London and the University of Kent. 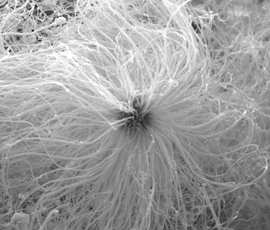 Carbon nanotubes are hollow, cylindrical molecules that can be manipulated to give them useful properties. The nanoparticles were discovered accidentally on the rough surfaces of a reactor designed to grow carbon nanotubes.

Described as sea urchins because of their characteristic spiny appearance, the particles consist of nanotubes filled with iron, with equal lengths pointing outwards in all directions from a central particle.

The presence of iron and the unusual nanoparticle shape could have potential for a number of applications, such as batteries that can be charged from waste heat, mixing with polymers to make permanent magnets, or as particles for cancer therapies that use heat to kill cancerous cells.

The researchers found that the rough surfaces of the reactor were covered in a thick powder of the new nanoparticles and that intentional roughening of the surfaces produced large quantities of the sea urchin nanoparticles.

“The surprising conclusion is that the sea urchin nanoparticles grow in vapour by a mechanism that’s similar to snowflake formation. Just as moist air flowing over a mountain range produces turbulence which results in a snowfall, the rough surface disrupts a flow to produce a symmetrical and ordered nanoparticle out of chaotic conditions,” said Dr Mark Baxendale from Queen Mary’s School of Physics and Astronomy.

On analysis, the researchers found that a small fraction of the iron inside the carbon nanotubes was a particular type usually only found in high temperature and pressure conditions.

Dr Baxendale added: “We were surprised to see this rare kind of iron inside the nanotubes. While we don’t know much about its behaviour, we can see that the presence of this small fraction of iron greatly influences the magnetic properties of the nanoparticle.”

The research was supported by the South East Physics Network and is published in the journal Carbon.