A 100-player orchestra takes to the stage at Queen Mary, University of London’s People’s Palace on Sunday 3 February for a concert celebrating east London’s past, present and future. 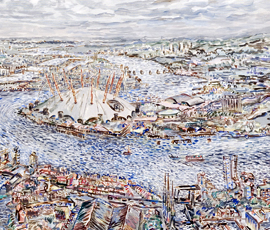 The Water City show tells the story of the Lower Lea Valley through film and music, focusing on the inside story of the Olympic legacy, now that the Games are over.

An oil painting exhibition by local artist Frank Creber will populate the foyer of the People’s Palace. His work documents the architectural and social revival of east London in recent years.

The event showcases the diverse talent of east London, bringing together players of all ages, including experienced professional musicians living in the area, local community players and staff and students from Queen Mary. The Queen Mary Music Society Orchestra are heavily involved with the concert, as is the university’s Director of Music, Alan Wilson, who will play the People’s Palace’s newly refurbished Rutt organ.

As a professional violinist and Professor of Violin and Chamber Music at Trinity Laban Conservatoire of Music and Dance, Michael Bochmann has performed across the world. Over four decades, he has produced over 50 recordings for the BBC with the Bochmann Quartet, as concert master of the English String Orchestra (ESO) and as a soloist.

Through his work with the Water City Festival Orchestra, the ESO and the charity Live Music Now, of which he is a patron, Bochmann is well known for taking classical music out of its traditional confines.

Michael Bochmann explains: “The Orchestra continues to grow and showcase musicians and artists living, studying and working in and around the East End. We are aiming to inspire creative talent in the area and promote that talent in years to come. It is an educational music experience for the players, and one that an audience from all backgrounds can enjoy.”

Chaired by social entrepreneur Lord Andrew Mawson, the Water City Festival is an ongoing celebration of east London and its growing reputation as the home of some 12,000 artists. The five Olympic Boroughs are, says Mawson, “home to the largest cultural quarter in Europe”.

Lord Mawson comments: “The area was neglected after the closure of the docks and the industrial decline in the 1970s. Now a new Water City is growing around these six miles of rivers and canals, from the 02 Arena and Canary Wharf to Hackney Marshes and the Olympic Park at Stratford. The Water City Festival Concert will tell, through music, film, and narration, the story of the Lower Lea Valley. It will give an inside view of Olympic Legacy as seen through the eyes of people who live and work in east London.”

The Water City Festival Concert starts at 6.30pm on Sunday 3 February. Tickets are £4 or free for under 16s and can be booked here: bit.ly/ZOICeL

For further information about events at the People’s Palace, visit www.qmul.ac.uk/peoplespalace

For more information about the Water City Festival, visit www.watercityfestival.org.uk/