When the original People’s Palace opened in 1887, one and a half million people visited the building in just one year, flocking to the east London venue for entertainment, education and recreation. Following a £6m refurbishment project to restore the building and install new technology, Queen Mary, University of London will relaunch the People’s Palace in February 2013 as a venue for both students and the community. 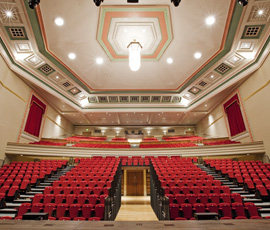 In a twenty-first century revival of its original vision, Queen Mary, University of London is set to showcase this historic ‘palace of delights’ with a six-week celebration of music, drama and comedy. Highlights include stand-up comedian Russell Kane, and performances by the London Chamber Orchestra and Water City festival Orchestra.

A musical gala, featuring the Water City Festival Orchestra and Bangladeshi vocalist Akash Sotor, kicks off the 2013 season of events on Sunday 3 February. The 100-player east London orchestra features guest musicians from Queen Mary and the local community, and will perform excerpts from Mussorgsky’s Pictures at an Exhibition, Karelia Suite by Sibelius, Saint-Saëns’ Dansemacabre and La Cathedral Engloutie by Debussy. The show will interpret the rich story of the Lower Lea Valley – past, present and future - through an exciting soundscape of expressive music, digital imagery and narration.

Other highlights of the spring programme include:

Monday 11 February sees Queen Mary and the university’s Students’ Union host a night of comedy for students and staff only - the first of many comedy nights to be held at the People’s Palace – headlined by popular comedian Russell Kane. The star of BBC Three’s Unzipped and Live At The Electric brings his Posturing Delivery tour to the stage of the Great Hall.

From Saturday 16 February through to Sunday 24 February ‘Peopling the Palace’ - a 10-day festival of art, film, performances and other public events – takes place at the venue. The festival features performances from both emerging and well established London artists, including: London-based performer and installation artist Geraldine Pilgrim; radical theatre director, choreographer and designer Simon Vincezi; and the multidisciplinary Montréal duo ‘2boys.tv’.

The showcase mixes entertainment, education and socialising, emphasising the creation of art between generations. ‘Peopling The Palace’ is led by Artistic Directors Lois Weaver and Nicholas Ridout of Queen Mary in a collaboration between staff and students in Drama, Film, Geography and the Media Arts Technology programme.

The Queen Mary Music Society will hold their spring concert at the People’s Palace on Thursday 14 March 2013. Through music and readings, they tell the story of Queen Mary’s history and how music has played such an integral part in the university’s development. Alan Wilson, Director of Music at QM since 1976, looks back over memorable musical moments in the university’s history. Alan will also be performing on the Great Hall’s restored 1936 Grade II listed Rutt pipe organ on Thursday 7 February. He will be introduced by Donald Preece (Emeritus Professor of Mathematics at Queen Mary) with a talk on the history and operation of the organ.

The London Chamber Orchestra – which now resides at Queen Mary – will close the spring programme of celebrations with a performance at the venue on Wednesday 20 March. Christopher Warren-Green conducts the UK's oldest chamber orchestra as they perform a programme of works by Britten, Poulenc and Beethoven. Benjamin Britten has his own history with the People's Palace, having conducted the Beggar's Opera and his comic opera, Albert Herring, there in 1948.

16 Feb – 24 Feb – Peopling The Palace, a festival of art, film and performance