Students and staff from across Queen Mary took part in the London Marathon on Sunday 21 March, raising thousands of pounds for good causes. 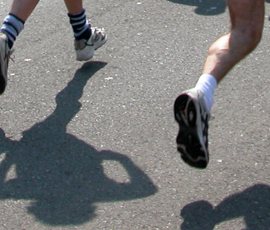 QMSU Volunteering recruited some 80 students to act as marshals on the 18th mile of the 26 mile, 365 yard, course. Along the route at Canary Wharf they kept runners and spectators safe and informed, helping the event’s 35,000 participants raise over £50m for charity.

Several Queen Mary students also took part in the race, including Alexandra Sherahilo, who raised over £700 for Breakthrough Breast Cancer and Jessica Cooper, who earned £1,745 for CLIC Sargent, a charity for children with cancer.

Dr John Broad raised over £2,600 for his charity, Bowel & Cancer Research. He says: “This was my first marathon so I was rather nervous. Having put a lot into the training I was pretty confident I could run that far, but I didn’t want to let anyone down! Bowel & Cancer Research funds some of the research we do in the National Centre for Bowel Research and Surgical Innovation, so to complete the marathon for them was my main target.

“The silence just before the start for the victims of the Boston marathon was very moving. The crowds throughout the route were so supportive; I have never experienced anything like it. Crossing Tower Bridge was brilliant, and during the last six miles the crowd were making so much noise. I finished in four hours 11 minutes, not a bad time but something I can definitely beat next time.”

Lucy Price, General Manager at the Institute of Dentistry ran her first marathon to raise money for Cruse Bereavement Care. She raised over £1,400 for the charity, smashing her original target of £400. “I completed the marathon in 4 hours 40 minutes and 40 seconds and was really pleased,” says Lucy. “The two highlights were coming round the corner to see the Cutty Sark looking glorious in the sunshine, with crowds about 12 deep, and crossing Tower Bridge at the 12 mile mark – the crowd support was incredible and you just couldn’t stop running! A brilliant experience.”

Dr Colleen Cotter, Reader in Media Linguistics in the School of Languages, Linguistics and Film, ran her fourth London Marathon in five years, raising over £1,500 for three charities: Whizz-Kidz, Headway and the Jonathan Roberts Charitable Trust. Professor of Breast Pathology Louise Jones of Barts Cancer Institute, running for Breast Cancer Campaign beat her £1,000 target, raising over £2,250 for the charity which funds some of her research.

Senior Lecturer in the School of Biological and Chemical Sciences Dr Rob Knell initially withdrew from his place in the Marathon, but reactivated his entry just five days before the event to raise money for the victims of the Boston Marathon bombings. With a target goal of £500, he received more than £1,700 in donations.

Hayley Cork, PA to the Head of the School of Electronic Engineering and Computer Science, took part in her first Marathon in memory of her niece. She raised just under £4,000 for the charity Tommy’s, who fund pioneering research into the causes of miscarriage, stillbirth and premature birth.

Hayley comments: “Due to my name being on my shirt the crowd started to call my name when it got tough. It was a bright sunny day which got more people onto the streets. I found miles 14-18 at Canary Wharf really hard but was lifted massively when I saw my friends and family. I am already waiting for the ballot to open again next Monday to enter for 2014!”