A poll of grassroots Tory members has revealed that two-thirds would have preferred David Cameron to have opted for a minority government or to have called an immediate second general election rather than team up with Nick Clegg to form the coalition that has governed Britain since May 2010. 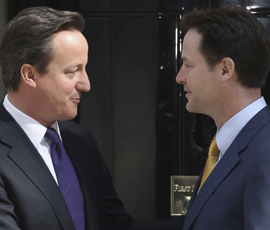 The study, which was designed by Professor Tim Bale of Queen Mary, University of London and Professor Paul Webb of University of Sussex, was conducted by YouGov and funded by the McDougall Trust, which hosted a presentation on the findings by Professor Bale on 17 July at City Temple Conference Centre, London

According to the findings the majority of party members would, in hindsight, have preferred not to go into coalition with the Lib-Dems, with 41% saying they would rather David Cameron had formed a minority Tory government in 2010 and 24% preferring to have seen an immediate second general election.  Only a third of members (33%), knowing what they know now about how the coalition has worked out, would still plump for that option.

This represents a big contrast with Conservative voters. When they were asked this week by YouGov whether they supported the coalition, they split 56%-40% in favour of the Clegg-Cameron deal.

Professor Bale noted: "Our survey shows that a worrying two-thirds of rank-and-file Tories wish now that Mr Cameron had never teamed up with Mr Clegg in the first place."

Professor Bale explains: “It’s not just a perceived lack of respect or particular policy concerns that appear to be driving negative attitudes to coalition.  Further statistical analysis shows that it’s also some members’ underlying ideology.  Particularly important is the feeling that they are significantly more conservative than their leader, Prime Minister David Cameron, especially perhaps on social issues like gay marriage rather than on the economy or public services where there is actually widespread grassroots support for cuts in public spending in order to reduce the deficit.”

Euroscepticism is also more popular with those members who opposed the idea that going into coalition in 2010. Among those who were pro coalition, only 54% would vote to leave the EU if there were a referendum tomorrow. But among members who would have preferred a minority government or second general election the figure rises to 79% and 80% respectively.  And those who are sceptical about the coalition are also significantly more likely to be tempted to vote for UKIP.

But not liking coalition and not being prepared to continue it after the next election are two different things.  As Professor Bale notes, "Whether they like it or not, the overwhelming majority of them – eight of out 10, in fact – would carry on with the coalition after the next election if that were the only way that the Tories could hold on to Number Ten.  Ideology matters to the Conservative grassroots but not as much as staying in power."