Centre of the Cell at Queen Mary University of London - the first science education centre in the world to be located within working biomedical laboratories - has teamed up with a top London tour guide to host an evening walking tour celebrating the East End’s medical history. 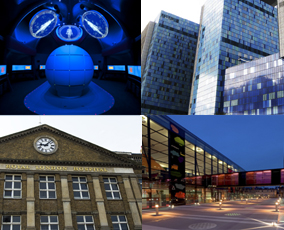 ‘Murder, Maladies and Medical Miracles’, taking place in Whitechapel on Tuesday 26 November, explores the rich heritage of Queen Mary’s medical school - Barts and The London School of Medicine and Dentistry – and The Royal London Hospital, from its origins in 1740 to the opening of its striking new building in February 2012.

Led by a guide from Guided Walks in London, the 60 minute tour delves into the area’s fascinating and often dark past, and includes stories of Whitechapel's well known names, from Jack the Ripper to Joseph Merrick – better known as the Elephant Man - to First World War nurse Edith Cavell, who trained at The Royal London.

After the tour, participants are invited to visit Centre of the Cell to find out how scientists at Queen Mary’s Blizard Institute are discovering the treatments of the future.

As well as interactive science games, videos of scientists describing their work and films projected onto the ceiling of the Centre’s ‘Pod’, visitors can study specimens from the university’s Pathology Museum, including a human brain.

Through the Pod’s interactive games, visitors can ‘grow’ skin, hunt a gene for inherited deafness, develop a new antibiotic for TB and grow virtual stem cells.

Tickets are priced at £8. To book, visit http://centreofthecell.eventbrite.co.uk/

For more information about Guided Walks in London visit www.guidedwalksinlondon.co.uk