A beautiful 1930s mural by a well known east London artist has been discovered beneath layers of paint at Queen Mary, University of London. The restored work now hangs in the foyer of the People’s Palace at Mile End, which has reopened following £6.3m of renovation work. 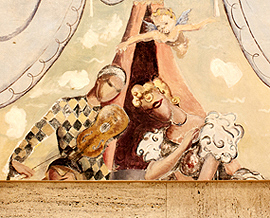 Three 12 ft by 10 ft paintings by Phyllis Bray (1911-1991) decorated the original Stern Hall when the People’s Palace opened in the 1930s as a cultural centre for the education and entertainment of east Londoners.

Bray, who was a member of the critically acclaimed East London Group of artists in the 1930s, originally painted three murals depicting dance, music and drama. Documents show that she had been keen to paint directly on the wall but the architect had insisted that her murals be on canvas. The canvas was then painted over several times in the course of building work, before the Palace was purchased by Queen Mary in 1954.

The mural was uncovered by Eoin O'Maolalai, Senior Estates Project Manager at Queen Mary, after an enquiry from Tate Britain into whether the paintings had survived.

While the bottom half of the murals was destroyed in the construction of a lecture theatre, O’Maolalai realised that the top half remained in a storeroom above the theatre. He says: “I found the wall and ran my fingers over the painted surface. What I felt wasn't plaster; it was more like fabric. I looked more closely, found a tear in the fabric, peeled off some of the paint and below it I could see the vague outlines of what could be one of the murals.”

“I peeled off some more of the paint and realised that I had found the top half of the murals. It was clear that the bottom half had been removed, possibly in the 1950s when a suspended ceiling was installed in the Small Hall.”

Paint specialist Catherine Hassall scraped flecks of the covering paint off the Bray mural, using a scalpel to remove it millimetre by millimetre and reveal the artwork. Hassall also carried out paint analysis during restoration work in the Great Hall of the People’s Palace, aiming to match the Hall’s redecoration to its original colour scheme.

Having scraped away the overpaint, the Bray canvas was removed from the wall, lined and stretched. A decision was made not to touch up the original, to avoid losing the original paint. It will be displayed in the People’s Palace foyer alongside photographs of the building and mural from the venue’s original 1930s heyday.

Local author David Buckman, partner of Phyllis Bray’s daughter Philippa, recently wrote From Bow to Biennale: Artists of the East London Group. The long-awaited study examines the lives and work of the artists who gained huge media coverage and commercial success in the 1920s and 1930s. The book includes the chapter Bray's People's Palace triumph.

David Buckman says: "Phyllis Bray had been a star student at the Slade School of Fine Art and the People's Palace mural was forerunner of much distinguished work she would do in this field.  Although she was a versatile easel painter, draughtsman and illustrator, over many years Phyllis was the invaluable assistant to Hans Feibusch, the pre-eminent twentieth century British muralist, on huge church and public building commissions."

Professor Philip Ogden, Senior Advisor to the Principal at Queen Mary, comments: “The discovery of this mural is hugely exciting. The installation of new technology has made the People’s Palace an exciting modern venue for the arts, but we have also managed to preserve its history, retaining important links to its past.”

“The restoration works illustrate Queen Mary’s commitment to its listed buildings and give us first-class public space, for the benefit of both the university, and our local community – as was the building’s original purpose.”

In a twenty-first century revival of its original vision, Queen Mary is set to showcase this historic ‘palace of delights’ with a six-week celebration of music, drama and comedy throughout February and March 2012. Highlights include stand-up comedian Russell Kane, and performances by the London Chamber Orchestra and Water City Festival Orchestra.