Famous works by Beethoven and Britten will be played by the London Chamber Orchestra on Wednesday 20 March, in a concert marking the official re-opening of the People’s Palace at Queen Mary, University of London. 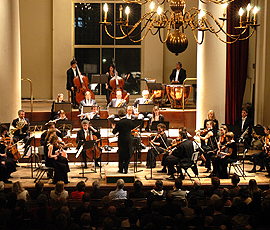 The concert is the finale of a programme of events opening the Mile End venue after its £6.3m refurbishment. The LCO will play works by British composer Benjamin Britten, Beethoven and an exciting performance of Poulenc’s Concerto for Organ, Strings and Timpani on the newly restored 1936 Spurden Rutt organ.

Celebrating the centenary of one of Britain’s great composers, Benjamin Britten, the LCO will perform the hugely popular Young People’s Guide to the Orchestra. This dedication to Britten also highlights his connection to The People’s Palace, having conducted two of his operas in the hall in 1948.

Concert goers will then experience the Spurden-Rutt organ, on which soloist Hubert Best will bring to life Poulenc’s Concerto for Organ, Strings and Timpani, a concerto that explores a range of styles, tones and textures. Beethoven’s Symphony No.5, possibly the world’s most famous musical work, brings the concert to an end and marks the start of a new beginning for the People’s Palace.

Christopher Warren-Green, LCO Music Director and Principal Conductor says:  “I am sure that the beautifully refurbished Peoples Palace Hall will go on to live up to its important historical remit in providing the east side of London with an important cultural centre of its own. We are hugely excited to have the honour of marking this official opening with a concert by the LCO.”

First opened in 1887, the People’s Palace on Mile End Road boasts a remarkable history. Seen as the area’s answer to arts, culture and education in poverty stricken nineteenth century east London, it held everything from art exhibitions to tea dances and lectures and featured a swimming pool and indoor garden.

Almost half a century after its inauguration, a fire destroyed the venue and its Great Hall. The People’s Palace was reborn in 1936, when a magnificent new building was erected to replace its predecessor, displaying the art-deco facade that can be seen today.

Now celebrating 125 years in existence, the venue has been refurbished for the use of the university and its local community. Developments include the renovation of the Great Hall to match its 1930s décor and the exciting restoration of the original 1936 Spurden-Rutt organ. Up-to-date technology in sound, lighting and ventilation has been installed, along with a new and extended foyer area.

Professor Philip Ogden, Senior Advisor to the Principal at Queen Mary, chaired the committee overseeing the restoration work at the People’s Palace. He says:  “Bringing the People's Palace back to life has been a very exciting project. It has provided both the university and our wider community with first class facilities for a wide range of music, theatre and other public events.”