A Queen Mary, University of London graduate who helped discover the Higgs boson – the elementary particle believed to be one of the building blocks of the universe – received an honorary doctorate during the university’s Summer Graduation Ceremonies this week. 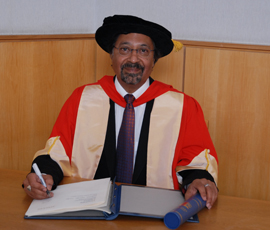 Honorary doctorates and Fellowships are awarded by the University of London to those who demonstrate excellence in their field, command national or international recognition or have given exceptional service to a university.

Born in Kenya, Tejinder Singh Virdee moved with his family to England at the age of 15. He went on to gain his BSc in Physics at Queen Mary in 1974 then completed a PhD in particle physics at Imperial College London before joining the European particle physics laboratory CERN in 1979.

In 1990, Professor Virdee initiated the creation of the Compact Muon Solenoid (CMS) detector, which has jointly led the search for new fundamental particles. The experiment now involves over 2,500 scientists and engineers from some 40 countries. Professor Virdee has played a critical role in advancing understanding of the deep structure of matter and of the physical world.

Ruth Mackenzie CBE was Director of the Cultural Olympiad, the official cultural programme for the London 2012 Olympic and Paralympic Games, and the curator of its finale, the London 2012 festival. Ruth energetically supported People’s Palace Projects, the art charity based at Queen Mary, as they staged a 30-day Cultural Occupation of London by 30 of Brazil’s most vibrant emerging artists during the Festival.

Amongst other roles, Ruth Mackenzie has previously been Director General of the Scottish Opera, Artistic Director of Chichester Festival Theatre, a consultant to the BBC, Tate, and Barbican, and special advisor to the Secretary of State for Culture, Media and Sport.

Lord Mawson of Bromley-by-Bow is a social entrepreneur who has had a major impact on the social, economic and cultural regeneration of east London. He is a member of the London Legacy Development Corporation and, through the creation of the Water City Group, aims to maintain east London’s post-Olympic central role in the cultural and economic life of the capital.

Andrew Mawson OBE trained for the Christian Ministry in Manchester and graduated with a BA in Theology from the University of Manchester. He is founder of the Bromley-by-Bow Centre, a community organisation focused on art, health, education and practical skills. He is co-founder of the Community Action Network, and has played a leading role in creating the business and community relationships vital to the regeneration of St Paul’s Way in Tower Hamlets. Andrew Mawson was appointed OBE in 2000 and made a cross-bench life peer in 2007 in recognition of the social impact of his work.

Professor Paul Strohm is a scholar of medieval literature, such as Chaucer, and a long term supporter of medieval studies at Queen Mary. In 2012-13 he sat as Leverhulme Visiting Professor of English and History, where he delivered a series of lectures on the discovery of the interior self in medieval literature.  He is a former Vice-President of the American Association of University Professors and from 1998-2003 was J.R.R.Tolkien Professor of English Language and Literature at the University of Oxford.

Professor Strohm’s work is pioneering in its interdisciplinary engagement between literature, social thought and history. His books include studies of Chaucer, fifteenth-century literature, and a short history of the conscience. His most recent work is a collection of 100 stories of 100 words long.