Britain’s first female serial killer and a grim trade in the teeth of corpses are among the macabre topics in the Autumn seminar series at Barts Pathology Museum, part of Queen Mary University of London. 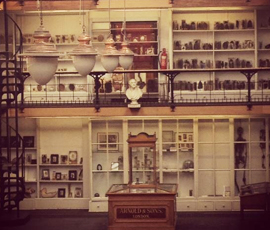 Audiences can experience a rare viewing of the Museum's second floor, learn about fascinating Victorian death and mourning customs, meet several renowned UK authors, and hear from the Museum’s conservationist as she reveals some of the human stories behind the 5,000 medical specimens in its collection.

The series runs from September to December and includes a viewing of a Sherlock Holmes film shot within the museum and a closing talk on the history of gin: from ‘mothers’ ruin’ in the Eighteenth and Nineteenth centuries to today’s trendy tipple.

All up-coming events include a drinks reception and the chance to view exhibited specimens on the first floor of the Museum, which is based at Queen Mary’s West Smithfield Campus. Tickets are £6.50, including booking fee and can be secured via http://bartspathology.eventbrite.co.uk/.

Brighton-based lecturer in social and cultural history, Sarah Tobias, gives an illustrated talk on the fascinating rituals and customs around Death and Mourning in Victorian England.

Leading criminologist Professor David Wilson will lecture on Mary Ann Cotton, Britain’s First Female Serial Killer. In 1873, Cotton was convicted of murdering her children and hanged. She is believed to have had up to 21 other victims, including several husbands. A special collection of specimens relating to Victorian poisoning, suicides and murders will be available to view during this event.

Wednesday 23 October – A Potted History of the Pot: The Stories behind the Specimens

The Museum’s curator, Professor Paola Domizio, will discuss the history of potting pathological specimens and how medical teaching has developed. Assistant Technical Curator Carla Valentine discusses her work in conserving the Museum’s 5,000 medical specimens and explores some of the human stories behind the pots. This lecture forms part of a series from The Royal College of Pathologists which explores A History of Pathology in 50 Objects. For the first time, the second floor will be open to visitors during this seminar.

Award-winning journalist, academic and popular historian Catharine Arnold offers a history of London’s dead, with a talk on the city’s largest cemeteries and the railway which transported bodies to them. The sites, which include Tower Hamlets Cemetery, are known as the ‘Magnificent Seven’ and were established in the 19th century to alleviate overcrowding in existing parish burial grounds. Catharine is the author of Bedlam: London and its Mad and Necropolis: London and its Dead.

Wednesday November 6th – Kill or Cure: An Illustrated History of Medicine
Author Steve Parker launches his new history of medicine book, Kill or Cure. Published by Dorling Kindersley, it will be available to purchase at the event.

A short film shot at Barts Pathology Museum - Sherlock Holmes and the Stolen Emerald by Céline Terranova - will be screened, followed by a talk from author Robert Ryan on his book, Dean Man’s Land, which focuses on Holmes’ Assistant Dr Watson.

Wednesday December 4th – Something to sink your teeth into

Guests will be invited to view the Museum's dental collection - including dentures made from the teeth of the dead and worn by the living - during this event. Queen Mary’s Professor Robert Allaker will get the audience to interactively vote on which bacteria are responsible for causing bad breath, then Kirsty Chilton of The Old Operating Theatre discusses the grim trade of removing and selling dead men's teeth.

Wednesday December 11th – “A History of Gin” with Geraldine Coates

Finishing off 2013 is a special event, sponsored by premium gin brand Hendricks, with author and gin expert Geraldine Coates. Geraldine is the editor of the website for gin lovers, gintime.com and published The Mixellany Guide to Gin in 2009. She will explore how the ‘crystal clear marriage of neutral grain spirit and exotic botanicals’ become an integral part of the bartender's repertoire, from medieval monasteries to its modern popularity amongst trendy London drinkers. Needless to say, ticket prices include refreshments.

For more information about Barts Pathology Museum and further events taking place at the venue, visit the Pott’s Pots blog at  http://www.potts-pots.blogspot.co.uk/ or sign up the mailing list by contacting Carla Valentine at c.valentine@qmul.ac.uk