Cultural impact of London universities celebrated at Inside Out Festival

A talk at the National Portrait Gallery on Elizabeth I’s image as the Virgin Queen, a guided walk through a famous Shoreditch slum and a computing magic show at Somerset House are some of the fascinating events featuring academics from Queen Mary University of London in this autumn’s Inside Out Festival. 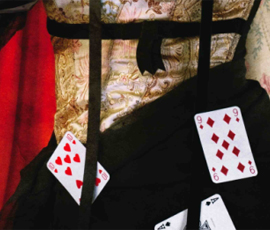 Inside Out, which runs from Monday 21 October to Sunday 27 October in venues across London, showcases the impact that London’s universities have on culture across the city. The Festival is curated by The Cultural Capital Exchange in association with the Times Higher Education magazine.

Marking the 150th birthday of celebrated East End writer Arthur Morrison, Dr Nadia Valman will lead a guided tour of a former Shoreditch slum on Tuesday 22 October. Dr Valman, senior lecturer in Victorian literature in the School of English and Drama at Queen Mary, will explore the Old Nichol slum, now the Boundary Estate – the site of Morrison’s most notorious novel, A Child of the Jago (1896). More information

On Thursday 24 October, computer scientist and magician Professor Peter McOwan – Queen Mary’s Vice Principal Public Engagement and Student Enterprise – performs The Maths and Computing Magic Show at Somerset House, the Strand. In a show merging science with conjuring, he will perform some amazing magic tricks, before inviting the audience to sneak behind the scenes to explore the maths and computing behind them. More information

Also on 24 October, Queen Mary physicist Brian Wecht brings his science storytelling show to the October Gallery, Bloomsbury. Following its success in America and a sold-out event at Barts Pathology Museum earlier this year, guests at The Story Collider will hear six true, personal science stories from both scientists and non-scientists, explaining how science impacted on their lives. More information

Earlier in the day, former journalist and Attlee Professor of Contemporary British History at Queen Mary Lord Peter Hennessy will speak at the Royal Society of Arts, discussing ‘The British Establishment’, its historical context, its effect on society today, and his views on whether and in what form it continues to exist. More information

At 7pm, Professor Miri Rubin of the School of History will talk at the National Portrait Gallery on representations of women and power. She explains how Elizabeth I presented herself, and how others – artists, poets, ambassadors, foreign dignitaries – saw her. Professor Rubin will explore how Elizabeth, despite being queen of Protestant England, borrowed traditional imagery associated with the Virgin Mary. More information

Most Inside Out Festival events are free, but require booking. For more information about events and to book, visit http://www.insideoutfestival.org.uk/2013/

For more information about The Culture Capital Exchange and its members, visit http://www.theculturecapitalexchange.co.uk/members/