Barts Pathology Museum at Queen Mary, University of London needs your vote to win funding for a unique show uncovering historical links between dancing and death, from Day of the Dead celebrations to ‘mass hysteria’ and The Dancing Plague of 1518. 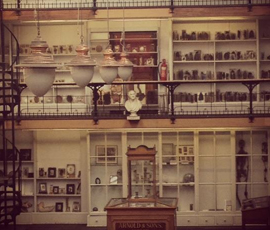 The popular Victorian medical museum at West Smithfield has reached a shortlist, which also includes the Museum of London, in hotly-contested arts competition Connect10. The winner will receive funding to host a unique event, in partnership with controversial artistic duo Jake and Dinos Chapman.

Voting opens at 11am on February 19, with the public deciding which museums and galleries should win the right to be ‘connected’ with contemporary artists.

“The Chapmans are willing to mix the macabre with the mirthful and don’t take themselves too seriously,” says the museum’s Assistant Technical Curator Carla Connolly. “They are unafraid of pushing boundaries, something that our museum also did to huge success with last year’s headline-grabbing diseased cake festival.”

“Our evening seminars and workshops often tackle dark and unusual subjects and they are extremely popular. London is clearly full of curious, creative types who want their evening entertainment to have an educational element. It would be a huge honour to work with the Chapmans on such an event.”

The Pathology Museum was shortlisted from hundreds of cultural and heritage venues who submitted ideas for unusual events to be held in collaboration with the chosen artists.

The Museum hopes to win funding to host an interactive theatre, dance and music performance titled Danse Macabre, which would be inspired by topics including: ‘The Dancing Plague’ of 1518 and Mass Psychogenic Illness; the discovery of 12,000 bodies in the Enon Chapel in 1839 and the subsequent tea dances which were held above them; Mexican Día de los Muertos, or Day of the Dead, celebrations; and medical conditions historically described as ‘dancing’, such as St Vitus’ Dance or epilepsy.

The Connect10 competition is supported using public funding from the National Lottery through Arts Council England. It is part of Museums at Night, a festival run by Culture 24 that celebrates inspiring after hours cultural events in museums, galleries and heritage sites.