Anatomical art by figurative painter Geoffrey Harrison will be displayed this August at Barts Pathology Museum, among the medical specimens that inspired his work. 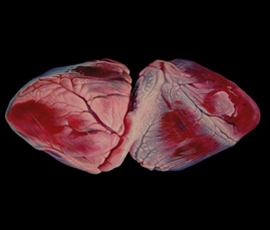 The Museum, which is part of Queen Mary, University of London, will be open from 6pm on Thursday 15 August for the launch of an exhibition showcasing Harrison’s work as Artist-in-Residence from 2012-13.

me. complete. you. will run from 15 – 29 August at the Museum, which recently appeared as the only UK entry in CNN's list of the World's Weirdest Medical Museums. The show features around 25 paintings inspired by the Museum’s collection of preserved 18th-to-20th century anatomical specimens, focusing on the heart, brain, hands, feet and tongue.

The artist is the son of medical illustrators. He says: “My childhood was spent surrounded by medical imagery. The subjects of death, life, flesh and mortality have always provided a strong current in my work. My representation of anatomical matter, the human body and its parts often references medical illustrative technique and vocabulary.

“My work uses the power of the visual metaphor to suggest ideas beyond the image. Painted brains and hearts come to represent the tensions between emotion and pragmatism, while other symbols also emerge; stigmata and crucifixes, for example, suggesting themes of love, sacrifice, faith and humanity.”

Entry is free for the Thursday 15 August launch event of me. complete. you. but must be booked via eventbrite: http://bartspathology.eventbrite.co.uk/

Barts Pathology Museum will be open daily between 2-6pm weekdays during the exhibition. If you would like an out-of-hours appointment, please contact the artist via geoff@geoffreyharrison.co.uk.

Geoffrey Harrison is originally from Manchester. After completing an undergraduate degree in Fine Art Printmaking at the School of Fine Art in Hull, he lived in Japan for several years. He returned to the UK to complete an MA in London and now lives and works in the city.

His practice is often collaborative and in partnership with other organisations and includes teaching, workshops and seminars and curating work by other artists. His work has been exhibited in Japan and the UK in various group and solo shows and is in private collections nationally and worldwide.

He recently led a workshop at the Museum of London’s major exhibition, Doctors, Dissection and Resurrection Men, and in April 2013 presented at a Royal College of Art seminar on cross-disciplinary approaches toward studying the body. He will begin work as Artist-in-Residence at the Royal Veterinary College from late 2013.

The beautiful Grade II listed Barts Pathology Museum was opened in 1879 and houses over 5,000 medical specimens. It spans three mezzanine levels and includes pathological pots relating to all areas of anatomy and physiology, including the skull of John Bellingham - assassin of Prime Minister Spencer Percival.

The Museum is listed in the book London: Hidden Interiors by Philip Davies and has appeared on numerous documentaries, including Ian Hislop’s Stiff Upper Lip and Time Team with Tony Robinson. The Museum is hidden within the grounds of St Bartholomew’s Hospital and is leased by Queen Mary, University of London. It is therefore run independently from the hospital.

Designed by the architect Edward I’Anson, the Museum was opened in 1879 by the future Edward VII and proved a valuable resource for medical students. It gradually fell into disuse following the opening of a new pathology department in 1909 and the building of clinical skills teaching rooms in the 1970s.

Barts Pathology Museum’s specimens are now undergoing an extensive period of conservation, so the building is only open to the public during special events.