A Cautionary Tale of Poison, Betrayal and Greed at Barts Pathology Museum

Award-winning medical journalist Sandra Hempel is to speak on the use of arsenic in murder, at Barts Pathology Museum on Tuesday 18 June. 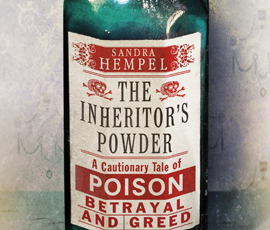 The Inheritor’s Powder looks at an 1833 murder case in the sleepy village of Plumstead, where the death of a wealthy landowner became a case devoured by the national media. When George Bodle, his wife, and three other members of his household fell violently ill, cholera was suspected. When Bodle died, the local doctor alerted a magistrate to his suspicions of poison.

In the nineteenth century, criminal poisoning with arsenic was easy. For a few pence and with few questions asked, it was possible to buy enough poison to kill off an entire family, resulting in arsenic’s popular name: The Inheritor’s Powder. While poisoning was easy, it was a notoriously difficult crime to prove.

With so much attention on the Bodle case, chemist James Marsh developed a test that was to prove vital in the developing field of forensic toxicology.

Sandra Hempel is a journalist and author who specialises in health and social issues. She has written for a wide variety of popular newspapers and magazines, including The Times, The Sunday Times and The Mail on Sunday. Her first book, The Medical Detective, won the Medical Journalists’ Association Book Award and the British Medical Association Book Award for the public understanding of science.

Tickets for the event are available through eventbrite priced at £5.95 including booking fee and a drinks reception: http://inheritorsweapon-eorg.eventbrite.co.uk/#

The Inheritor’s Powder: A Cautionary Tale of Poison, Betrayal and Greed is published by Weidenfeld & Nicolson and available to buy from 13 June. Copies will be on sale at the event.