Noting her extraordinary impact and disputed legacy, Professor Tim Bale  reflects on the positives and negatives of Margaret Thatcher’s career following her death on 8th April. 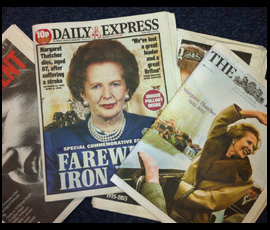 "On the one hand she confronted underlying structural problems in the UK economy, but on the other she presided over an enormous loss of jobs and some industrial areas of the country remain scarred to this day. Future political leaders have much to learn from her, both as an example and a warning.

Margaret Thatcher was a crusader rather than a compromiser, a warrior rather than a healer. She believed that those who came before her (and even the governments in which she was a minister) had largely got it wrong, especially (although never exclusively) on the economy. She was absolutely determined to change all that, even – and this is the very big difference with her more patrician, paternalistic Tory predecessors – if that meant a return to levels of  unemployment that hadn’t been seen since the 1930s and which many regarded as morally unacceptable and electoral suicide.

On the other hand, although Margaret Thatcher was an ideologue – too much of one for some of her colleagues as well as her opponents – she could also be highly pragmatic behind the scenes, moving step-by-step when that seemed like the best way of getting what she wanted: the trade unions, for example, were slowly strangled by a combination of job-losses and separate pieces of legislation before she finally finished them off by confronting the miners in the mid-eighties.

It’s proof positive of Mrs Thatcher’s extraordinary impact that her legacy is still hotly disputed today. That said, the smoke has cleared sufficiently for us to at least begin to draw up a balance sheet.

On the positive side, under Thatcher Britain confronted some of the underlying structural problems in its economy – one which desperately needed both shaking and freeing up. More people got richer quicker – and more people gained a fundamental stake in the economy through buying their own home and buying shares in the industries she privatised, even though most of the latter eventually fell into the hands of big institutional investors rather than creating the ‘share-owning democracy’ she dreamed about. And, while it’s possible to exaggerate Thatcher’s role in the Cold War with Communism, the way she combined with US President Ronald Reagan to renew an arms race that basically bankrupted the Soviet Union undoubtedly accelerated Eastern and Central Europe’s historic march toward freedom and democracy that began with the fall of the Berlin Wall.  She also stood up to terrorists, helping to convince the IRA that there was no future in the armed struggle. Certainly, no one who remembers the courage with which she conducted herself during the Brighton bombing will ever forget it.

On the negative side, and back in the UK, an awful lot of people lost their jobs, and some parts of the country – especially those which relied on heavy industry – have never recovered economically.  Nor it seems will they ever vote Conservative again, which partly explains why the Party failed to win a majority in 2010 and will find it difficult (if not impossible) to do so next time round. Certainly, the relationship between the rest of the UK and Scotland – and between the UK and Europe – began to deteriorate markedly during her premiership. Her privatisations arguably gave rise to myriad commercial monopolies and oligopolies – particularly in the energy sector – that are still with us today. Her housing policy also helped lead to what has become a chronic failure to build enough housing for the country’s growing population. Public services like health and education had to be rescued – very expensively – by Tony Blair’s Labour government. The UK also became over-reliant on financial services, which partly explains why it was hit so badly by the global financial meltdown and why our economy still badly needs rebalancing.

So what were Mrs Thatcher’s strong points? The list is long, but the following would surely be on it. She refused to take no for an answer when others might have given up or not even begun. She had an instinctive feel – at least for a while – for public opinion. She had a vision of where she wanted the country to go and what she wanted it to look like. She realised she wouldn’t get there straight away and that sometimes, beneath the rhetoric, compromise was necessary. But she always kept her eyes on the prize – a freer economy and a more self-reliant people, and a Britain that retained its sovereignty and could hold up its head in the wider world

Her weak points? Over time, she stopped listening to her colleagues. She became obsessed with Europe. And she began to believe in her own mythology, forgetting like all leaders she was both fallible and mortal. The poll tax, which risked losing her parliamentary colleagues their seats, was a monument to that mistake.

Finally, when it comes to thinking about what present and future political leaders the world over could learn from Margaret Thatcher, they should bear in mind both her strengths and her mistakes. They should lead from the front, but should never forget to listen to those with different points of view. They should have a vision, but make sure they consider some of the downsides of their plans, too.  They should also realise that winning elections doesn’t automatically mean that they’ve united the whole country behind them: apart from when she went to war in the Falklands – which many would consider her finest hour – Mrs Thatcher never managed to do both. Nor, in the end, did she convert most British people to her way of thinking: most of us remain stubbornly centrist, keen on capitalism but concerned to mitigate its harder edges.

For all that, apart perhaps from Clement Attlee – the Labour Prime Minister from 1945 to 1951 and a leader with very different values and very different style – Margaret Thatcher has a fair claim to be called the greatest Prime Minister and most influential politician since the Second World War. She will not be forgotten for a very, very long time."

The views expressed in this article are of the opinion of the author and do not reflect those of the PR team or Queen Mary, University of London.

Tim Bale is Professor of Politics at Queen Mary and author of The Conservative Party from Thatcher to Cameron (Polity, 2010). His latest book is The Conservatives since 1945: the Drivers of Party Change (Oxford University Press, 2012).

Professor Bale also writes a blog for Conservative Home . His latest article is on Margaret Thatcher. The success she brought the Conservatives also sowed the seeds of failure