A researcher at Queen Mary, University of London wants to produce a documentary chronicling the gruesome horrors of pre-anaesthetic surgery and the history of anatomical collections, and is crowd-sourcing to raise funding for it. 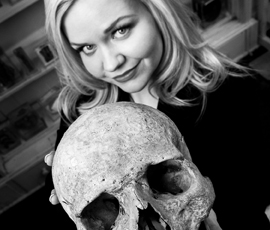 Medical historian Dr Lindsey Fitzharris is a Wellcome Trust Research Fellow at Queen Mary and a popular blogger, writing as ‘The Chirurgeon’s Apprentice’. She is an expert in 17th and 18th Century medicine and the rise of the surgeon, or ‘chirurgeon’, during the period.

Dr Fitzharris hopes to raise £20,000 to turn her research into Medicine’s Dark Secrets - a feature-length documentary chronicling medicine’s morbid past, from body-snatching epidemics, to the criminals who were executed and anatomised, unwittingly helping to advance medical science between the 17th and 19th Centuries.

She has launched a ‘crowd-sourcing’ campaign through the website IndieGoGo – a popular method of fundraising where the public donates as much or as little as they like, in exchange for small perks, from a mention in the film’s credits, to an exclusive seat at the production’s first screening.

Such is the popularity of the subject that some £4,000 was raised in the first couple of days of the campaign, from a public that Dr Fitzharris believes is naturally curious and eager for new research about death and the medical history of their ancestors.

“Crowd-sourcing really engages people with the subject being explored- they will value the finished product so much more, knowing that they have played a part in bringing it to life,” Dr Fitzharris comments.

Lindsey Fitzharris has explored some of the UK’s most extensive anatomical collections – including the 5,000 specimens held at Barts Pathology Museum, Queen Mary’s Victorian medical museum at West Smithfield. She believes that history is not just the domain of historians – it belongs to the wider public: “We want to put the ‘human’ back into human anatomy and bring the past back to life through the stories of people who died,” she says.

In Medicine’s Dark Secrets, Fitzharris will explain the history of body parts now held in medical collections, how the harvesting of organs became taboo, and why these specimens were later hidden in museum archives.

Launching her appeal for public support, Dr Fitzharris says:  “Your help will enable us to give each victim a voice and put each specimen in a historic context. Your donations will help us to gain access to locations and collections, many of which have never been seen by the general public.

“What I hope to provide through this documentary is historical context. Importantly, I want viewers to remember that these disembodied specimens once belonged to real people with lives like you and me. By raising the money through IndieGoGo, I'll maintain control over the project so that it doesn't just become a voyeuristic journey into the past. “

Lindsey Fitzharris completed her PhD at the University of Oxford. She has appeared on BBC4 with Michael Moseley in Guts: The Strange and Mysterious World of the Human Stomach, advised on historical issues for National Geographic and appeared with Tony Robinson on Gods and Monsters for Channel 4.

Donations to Medicine’s Dark Secrets will pay for access to restricted museums and collections and fund a film production crew, equipment and editing costs.

To donate to the campaign and watch a preview video from Big Baby Productions Ltd, visit: http://www.indiegogo.com/projects/medicine-s-dark-secrets