New research from Professor Jane Wills of Queen Mary University of London has found that in the two years since the Living Wage Foundation launched they have won the living wage for 23,000 workers, and put £49m into the pockets of low-income families. 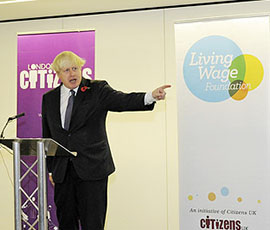 The study, which comes as the new Living Wage rates are announced on Monday (£8.80 for London and £7.65 for rest of the UK), was carried out by Professor Wills and is the first of its kind to measure the impact of the Living Wage of businesses and employees in the UK.  The study surveyed 359 of the organisations which have been accredited as Living Wage employers.

Queen Mary has consistently shown leadership on the Living Wage and was the first accredited university in the UK in 2006. In addition Professor Wills’ long-running research into the impact of the Living Wage in London reveals that it has affected at least 18,866 workers, and put £182m into the pockets of low-paid workers. The impact figures jump to more than 100,000 workers and £235m if the temporary jobs provided on the Olympic site are included in the calculation.

Professor Wills, from the School of Geography, said: “Queen Mary was the first university campus to sign up to the living wage and it has been the first to be officially accredited by the Living Wage Foundation.

“We also teach a Masters and Postgraduate Certificate in the theory, history and practice of community organising – the model of politics behind the living wage campaign in the UK. As such, the living wage has come to have a positive impact on the research, teaching, practice, culture and community of the university.”

Edward Menkah-Ohemeng, is a cleaner at Queen Mary and being paid the living wage has had a direct impact on his family life. He said: “Before the Living Wage I was doing two jobs a night and a day shift and I didn’t have time with my family. I’m now able to stop the night job.”

Professor Peter McOwan, Vice Principal for the Centre for Public Engagement said: “We are proud that Queen Mary is a founding member of the Foundation and it shows our commitment to paying the London Living Wage. It’s a clear example of how we are working hard to support our staff in difficult financial times.”

The full report, film and Living Wage statistics are available at http://www.geog.qmul.ac.uk/livingwage/