English professor Bill Schwarz, of Queen Mary, University of London, beat nine other shortlisted authors to scoop Book of the Year at the Longman/History Today Awards for his study of colonial society as the age of the British Empire drew to a close. 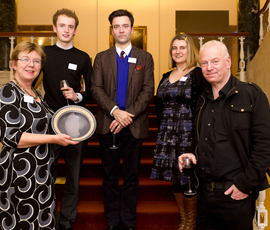 Memories of Empire: The White Man’s World (Oxford University Press) explores ideas of the white male, as he evolved during the time of the British Empire, from the mid-nineteenth century to the mid-twentieth century.

It works back from the response to Enoch Powell's 'Rivers of Blood' speech in 1968, when “racial whiteness had come to signify defeat and desperation”. The book focuses on the transactions between the colonies and society at home in England and looks at the conviction that the future of humankind lay in the hands of white men.

Professor Schwarz, of the School of English and Drama, was presented with his award at a ceremony on Wednesday 9 January at the Royal Society.

Professor Schwarz comments: “I'm delighted to have received this recognition. It cheers what otherwise could be a rather dismal mid January. However, the prize goes only to the first volume of the Memories of Empire sequence. I am now working hard to finish the second volume, The Caribbean Comes to England. And then the project has to be completed with the final instalment, Postcolonial England. Until this gets closer, celebrations seem a tad premature!”

Publishing house Longman and the magazine History Today present the annual Book of the Year prize to an author’s first or second work of history. The winning book is considered to have contributed significantly to making its subject accessible and rewarding to the general reader of history.

Bill Schwarz’s research focuses on postcolonial history, with particular emphasis on the end of the British Empire. Much of his recent work has concentrated on Caribbean writing of the twentieth century. He also studies the theoretical underpinnings of postcolonial history, looking at the relations between history and memory.

Professor Schwarz was shortlisted alongside nine other works for the Book of the Year prize. Glyn Parry’s The Arch Conjuror of England: John Dee (Yale University Press) and Andrew Preston’s Sword of the Spirit, Shield of Faith: Religion in American War and Diplomacy (Knopf) were both highly commended by judges.