A Bangladeshi interpretation of Alice in Wonderland and a new take on an Oscar Wilde classic are among the performances and events to be held at Queen Mary University of London, as it contributes to ‘A Season of Bangla Drama’ for the first time. 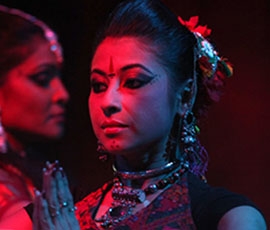 This well-established and popular festival, which celebrates Bangladeshi identity and culture, was launched in 2003 by Tower Hamlets Arts. Queen Mary will be one of four venues in London hosting events during November.

The Queen Mary programme runs from 7-10 November and includes a mix of traditional and modern dance and drama such as Being Ernest - the Tamarid Theatre Company’s Bangladeshi take on Oscar Wilde - and Rabindranath Tagore’s Tasher Desh: a Bangladeshi dance spectacular inspired by ‘Alice in Wonderland’.

As well as debates and seminars there will be a special lecture given by the Bangladeshi High Commissioner.

Queen Mary is well placed to host the festival as two of its campuses in Mile End and Whitechapel are based in the heart of Tower Hamlets.

The university's drama department is also recognised as one of the leading centres in the UK for research in performance. At the end of the festival a report will be produced to identify the meaning of ‘What is Bangla?’

Commenting on the importance of being part of the festival for the first time, Ali Campbell, from Queen Mary's Department of Drama, said: “The Festival uses us as a lens to ask itself, ‘What is Bangla?’ a particularly important question given that Bangla is a highly contested term and that many of Queen Mar'sy students and our local population in east London will identify themselves as of Bangladeshi origin.”

For more information on dates and times of the Festival go to: www.sed.qmul.ac.uk/festival.html