Queen Mary student top 3 ‘brightest and best’ in the UK

A second year English and European Law undergraduate from Queen Mary University of London reached the final of a competition to find the UK’s best and brightest students. 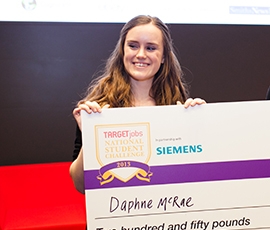 The competition’s aim is to help UK businesses identify future boardroom talent. Daphne made it through to the final in London on 9 December and was judged as one of two runners-up. She was presented with a cheque for £250.

The challenge saw competitors undertake a lengthy online intelligence test and the 60 with the highest scores were invited to the final stage. They then took part in a variety of practical tests, including individual and group exercises to test their decision making, creativity and business awareness.

Daphne said: “I was astonished to make it to the Grand Final – it was a lovely surprise though. Some of the tests were quite difficult because one would involve working in a team, and then next we would have to argue against each other.

"I did not expect to make the top three, it feels great, although it did take a while to sink in! Taking part in the challenge often leads to employers getting in touch with the students they particularly liked – it’s a great foot in the door.”