The experiences of former schoolteachers and students who lived through the worst years of the Northern Ireland conflict are explored in a short film created as part of a unique project on the peace process. 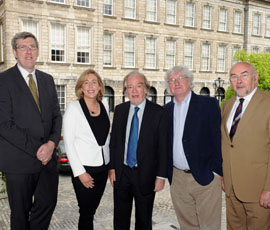 “Out of Adversity” emanates from the Peace Process: Layers of Meaning project, an innovative and imaginative collaboration between Queen Mary, University of London, Trinity College Dublin (TCD) and Dundalk Institute of Technology. The project has created an important oral archive on the peace process and a number of online resources. An interview training programme gave way to a series of cross-community and cross-border projects.

Launched at TDC the ‘Out of Adversity’ film draws on interviews with teachers, pupils and education officials from eight different schools in Belfast, Derry, Enniskillen and Newry. It paints a striking picture of the varied experiences of those involved in education in Northern Ireland during the Troubles. The 10-minute film documents how educators and communities endeavoured to ensure that schools functioned as sanctuaries during the conflict.

Project Director and Professor in Law and Public Policy at Queen Mary, Seán McConville, said: “Schooling has often been a factor in Northern Ireland's community division and strife. Yet schools have also provided refuge, opened minds and cleared the way to reconciliation. These possibilities weave their way through this short film.”

Dr Anna Bryson, the Project Co-Director and a Research Fellow at Queen Mary and TCD, added: "In this film, we have taken a broad and layered view of the Peace Process. It highlights the varied experience of teachers, pupils and educationalists. These voices help us more deeply and more generously to understand the past.”

John O’Dowd, Minister for Education, Northern Ireland, commented: “I found the film a powerful record of the challenges and experiences faced by teachers, and their efforts to retain a safe environment during the period of conflict in the north. As such, the film provides a record for future generations of how educators sought to ensure pupils continued to receive education against a backdrop of conflict.”