A legal advice centre at Queen Mary, University of London, was a double runner-up in two categories at the annual Attorney General Student Pro Bono Awards. 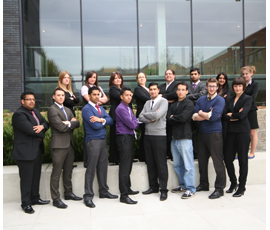 The 'Supporting those who serve' project run by Queen Mary Legal Advice Centre (LAC) came second in the Best New Pro Bono Activity category and the LAC itself was also a runner-up for the Best Contribution by a Law School at the Awards ceremony which was held on 25 March.

Julie Pinborough, LAC Manager, explains: “We launched the service because we had a case a few years ago where someone serving in the armed forces was unable to deal with his legal issue fully, due to returning to duty in Afghanistan. His absence from the UK meant his problems escalated and could have resulted in thousands of pounds in legal fees. Luckily we were able to assist him, but it did raise our awareness of the difficulties faced by servicemen and women.

“Another problem that many current and ex armed forces personnel face is that although they can use the same legal advice provisions as the general public, these services are generally not set up to deal with the more far reaching issues that they face such as PTSD (post traumatic stress disorder) and mental health illnesses.”

Last year the LAC, which was set up in 2006, had over QM 70 students and more than 100 top city lawyers volunteering their free time and professional skills, to deal with 3,000 enquiries on a broad range of cases including LGBT discrimination, medical negligence, employment discrimination and criminal offences.

The Awards celebrate the positive impact that pro bono activity (unpaid, voluntary work) can have on people who desperately need to access justice but are unable to afford costly legal fees. This year the Attorney General, Dominic Grieve QC MP,  announced the winners at the end held at the House of Commons.

Julie added: “To be nominated and shortlisted in such coveted awards is a testament to the services we offer, and the calibre of our students. Our programme has grown progressively over the last six years; from our initial focus on key practice areas we have expanded to include almost every area of public interest law.”

If you are a member of the armed forces or an ex-serviceman/woman and or a member of the public who needs legal advice then please contact the Legal Advice Centre at lac@qmul.ac.uk or 020 7882 3931.

The centre has been nominated for several awards since it was established. It was winner of the Attorney General’s Best New Project in 2010 and a finalist in the Lawyer Award for Pro Bono Team of the Year.