Professor of Drama and Performance, Paul Heritage has addressed two sessions at the World Economic Forum in Davos this week. 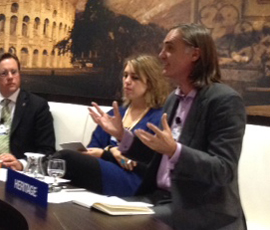 Professor Heritage, who is also artistic director of the People’s Palace Project (PPP), a research centre established in 1997 to explore the ways in which the arts can respond to urgent social crises, spoke about his experiences working with communities in the UK and Brazil.

He highlighted one key project ‘Encounters: Art transforming lives’ and spoke about the importance of breaking down cultural barriers and turning violent neighbourhoods into cohesive communities.  The Encounters project helps young people transform their worlds through art. It provides them with transferable artistic, audio, visual and production skills, offer opportunities within the field for participants, as well as creating an arena of public discussion about the role of art in shaping young people’s future.

Professor Heritage explained: “I was invited to attend the World Economic Forum as a Cultural Leader. This year’s theme is Resilient Dynamism which really does go to the heart of the work that PPP has developed over the last 15 years, which is exploring the power of the arts to enable people to avoid violence and injustice.

“We work locally in the East End of London, particularly with St Paul’s Way School, as well as nationally with arts institutions in Manchester and Liverpool and internationally in Brazil too. At St. Paul’s Way we are creating a Drama club, offering workshops that will support A-Level students with their new curriculum and develop their performance skills, while also connecting them with current Drama undergraduates at Queen Mary.  I hope that we are continuing the aspirations and vision of those who built the original People’s Palace in the 1890s.”

Each year the World Economic Forum in Davos hosts dozens of world leaders, hundreds of ministers, and thousands of CEOs from the world’s most powerful companies, and the odd celebrity too. Hollywood Actress Charlize Theron received an award for her Foundation’s work with young Africans.