Thirty dancers, choreographers and performance academics from China, Taiwan and the UK will join creative forces in London next month to produce nine new experimental dances. 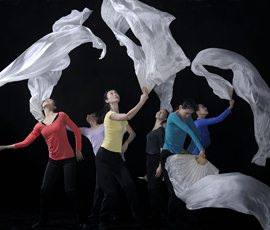 Those involved will overcome language barriers and cultural differences to create cutting-edge choreography with both Eastern and Western influences, as part of ArtsCross London 2013.

The project is led by Professor Christopher Bannerman, Head of ResCen Research Centre at Middlesex University, and Dr Martin Welton, Senior Lecturer in Theatre and Performance in Queen Mary’s Department of Drama, with colleagues from the Beijing Dance Academy and Taipei National University of the Arts.

This is the fourth year this major international event has been held, with earlier incarnations in Beijing (2009 and 2012) and in Taipei (2011).

The theme for this year’s collaboration is ‘Leaving home: being elsewhere’. The three-week creative cross-border project begins on 21 July at The Place, one of London’s leading contemporary dance venues, and culminates in a performance there on 10 August, followed by a symposium at Queen Mary on 11 August.

Dr Welton explains: “ArtsCross is at the forefront of cultural exchange between these three countries. In making and discussing creative projects together we learn about what we have in common, but also that we have to face up to some of the differences between us. From an academic viewpoint we will be looking at the political, cultural and aesthetic implications of cross-border initiatives.

“We will try and find out the unique demands and challenges of working with artists from different countries who don’t speak the same language and ask how issues of translation, interpretation and cultural difference affect the creative process and involving universities is essential in this. Perhaps because of the intellectual and scholarly perspectives we bring, we have been able to act the brokers of international relations, and hopefully, in the long-term, as the agents of change.”