A conference on 18 April hosted by Queen Mary, University of London brought together senior politicians, academics and political thinkers, including Ed Miliband’s manifesto chief Jon Cruddas and Labour peers Maurice Glasman and Stewart Wood, to debate “The Politics of One Nation Labour”. 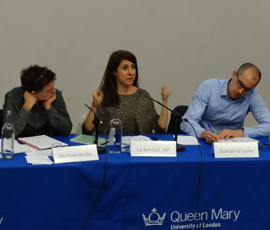 Organised by the PSA Labour Movements Group, Labour’s Policy Review, Queen Mary’s School of Politics and International Relations, the University of Bristol, and supported by Labourlist, the Political Quarterly and Demos, the event attracted over 200 delegates.

1. A different kind of economy

2. A determination to tackle inequality

3. An emphasis on responsibility (at the top and the bottom)

4. Protecting the elements of our common life

5. Challenging the ethics of neo-liberalism

Welcoming the opportunity for a debate with 'critical friends' about the content and direction of One Nation Labour, he argued the initiative is about attacking division in society and a supply side revolution from the Left and called for a new settlement on how to “pay our way in the world” stating that we need to “explicitly challenge the trickle down approach” and aim for “a different kind of growth”.

The day continued with a series of papers and panels. Addressing the theme of 'Labour, England and One Nation' Mike Kenny, Professor of Politics at Queen Mary, suggested   Labour’s reluctance to engage with Englishness could be costing it dear. Political thinker and author of Red Tory Phillip Blond spoke on the conservative tradition in 'One Nation Labour', arguing that the Left needs to rethink universalism and that a true 'One Nation Labour' approach would be more personalist, more local and less centralised.

A panel on 'Blue and Red in One Nation Labour' included contributions from Mark Wickham Jones, Professor of Politics at Bristol University, and Labour peer Maurice Glasman. Wickham Jones analysed the relationship between 'One Nation Labour' and previous Labour modernising initiatives under Kinnock and Blair, while Glasman focused on the need for a new model of community organising. 'The purpose of the Labour movement' he commented, 'is to give hope to people who don’t have it.”

In a panel on 'One Nation society', Professor Clare Annesley of  Manchester University warned of the dangers of treating gender equality as an afterthought. 'One Nation Labour'  she said, must address gender inequality in the economy, in families and in political life, to find a way for men and women to ‘muck in’ together so that they can share prosperity as Britain moves into economic recovery.  Queen Mary's Professor Tim Bale asked what a 'One Nation' welfare system might look like under Labour, suggesting that Labour's  association with the welfare state was simultaneously an asset and an Achilles heel, and that the party needed to develop a clearer sense of direction on its welfare plans.

The final round-table debate, chaired by Political Quarterly editor Michael Jacobs,  included contributions from Jon Cruddas, Liz Kendall, MP for Leicester West and Shadow Minister for Care and Older People, Duncan O’Leary from Demos and Greenpeace UK’s chief policy adviser Ruth Davis. Responding to questions and comments from earlier panellists and the audience, Cruddas suggested that establishing major policies now would be “putting the cart before the horse” but that the scale of Labour's 2010 defeat required a significant shift in thinking. He closed proceedings by outlining the next steps in the policy review process.

The event which was funded by Queen Mary’s Centre for Public Engagement was blogged live by Labour List and featured in the New Statesman and The Times.

In addition, here are the recording of the conference;