Contrary to the public perception of corporate ‘fat cats’, multinationals at Canary Wharf have embraced a culture of social responsibility, investing heavily in east London community projects since moving to the Docklands 20 years ago, finds a new study from Queen Mary University of London. 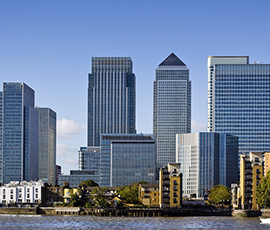 This is the first report to look at the impact Canary Wharf has had on its local community and the research highlights the extent and depth of corporate-community and philanthropic relationships that have since developed in east London.

It is 20 years since the controversial project to build Canary Wharf began, and now many of the country’s leading multinational corporations (MNCs) have put down roots and built strong relationships in the locality.

The Queen Mary study clearly shows that Corporate Social Responsibility (CSR) is now firmly entrenched in the functioning of MNCs and they are making important investments in their local area.

The study is being launched by Professor Cathy McIIwaine at the East End Community Foundation (EECF) on Monday 18 November. Professor McIlwaine from Queen Mary’s School of Geography said: “We were really encouraged by the fact that so many companies in Canary Wharf are working with local community groups and schools in east London and taking such a keen interest in the welfare of those on their doorstep”.

“We found that CSR is being taken extremely seriously by the corporations. The core question for these companies is now how to do effective CSR, not whether to do it. Although there are some limitations in relation to the sustainability of these activities, they fill an important gap in support for a wide range of organisations in the current climate of austerity.”

The research sought to analyse the evolving relationships between corporations based at Canary Wharf and east London communities over the past 20 years through a focus on corporate social responsibility (CSR) activities. The research was based on analysis of corporate reports, 12 face-to-face interviews and a small survey with representatives from companies, mediating brokering institutions, community organisations and schools.

For a copy of the full report ‘Mapping corporate philanthropy and community engagement in east London’ visit here: http://www.geog.qmul.ac.uk/research/themes/116854.html.

The project was funded by Queen Mary’s Centre for Public Engagement.