The Man, the Myth: Professor Mark White assesses the Kennedy legacy on the 50th anniversary of his death. 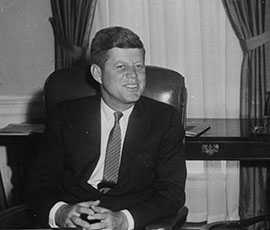 President Kennedy was assassinated on 22 November 1963 in Dallas, Texas. To the public he was the symbol of a shining new age, but in private he was a philanderer with mob links.

In his article, which first appeared in The Independent, Mark White a Professor in History from Queen Mary University of London, claims that the continuing reverence for the president is due more fundamentally to the power of his image constructed during his lifetime.

Professor White has written several books on JFK, including ‘Kennedy: A cultural History of an American Icon, which was published this month. He reflects on John f Kennedy iconic status as a young and charismatic leader who promised a brighter future for Americans and is consistently rated as one of the greatest leaders in US history.

However, on both sides of the Atlantic, many historians view Kennedy differently.  In polls academics have rated him as just an ‘above-average’ president and is consistently rated below Harry Truman.

He failed to secure the passage in Congress of his Bills on education, healthcare for the aged and civil rights. He escalated involvement in Vietnam and authorized the unsuccessful Bay of Pigs invasion of Cuba.

So why is it that so many Americans still admire Kennedy? View the article in full here.

Professor Mark White is a specialist in US foreign relations with a particular interest in the American presidency and the Cold war and post-Cold War era. He written extensively on the subject and published numerous including  books The Cuban Missile Crisis (1996); Missiles in Cuba: Kennedy, Khrushchev, Castro and the 1962 Crisis (1997) Kennedy: The New Frontier Revisited (1998); The Kennedys and Cuba: The Declassified Documentary History (1999)