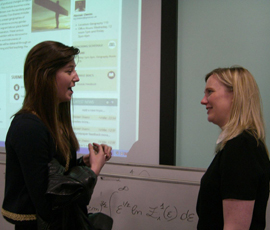 The group of first-year undergraduates had the opportunity to question Ms Creasy, on 22 March during a Q&A session that forms part of a course entitled Transforming Britain: Economy, Society and Politics. The course explores how different parts of the country respond to economic and social change, looking in particular at the impact of the financial crisis and government spending cuts.

Course leader Dr Alastair Owens, from the School of Geography who leads the course, said: “One of the distinctive features of our teaching in Geography is the way that we try to engage students with ‘real world’ issues. Having Stella join us to talk about her high profile campaign to tackle ‘legal loan sharks’ and bring down the costs of credit, has provided our students with a brilliant insight into a problem affecting many less affluent communities around the UK, including some local to Queen Mary here in the East End.’

Ms Creasy was elected as MP for Walthamstow in 2010. Previously she was Head of Campaigns at the Scout Association and a Deputy Director of the think tank Involve. She has been active in campaigning for the increased regulation of payday loan companies.

One of the students attending the session, Gregory Spencer, added: “We were given an extensive illustration of the current issues faced in today’s society with credit and debt which was well-informed and intuitive. The debate covered the problems faced with payday loan companies and raised many queries from students and staff alike. Ms Creasy provided clear succinct answers leaving everyone satisfied.”