Ruth Mackenzie CBE, mastermind of the Cultural Olympiad for the London 2012 Olympic & Paralympic Games, has received an honorary fellowship from Queen Mary, University of London. 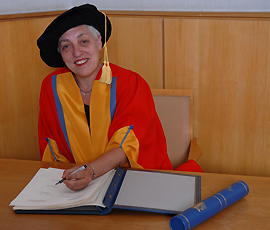 As Director of the Cultural Olympiad, Ruth Mackenzie was also curator of its finale, the London 2012 Festival – the largest ever UK-wide festival, with over 20 million attendances and more than 25,000 artists from all the countries participating in the Games.

Ms Mackenzie has had an illustrious career in the arts and has held previous posts as General Director of Scottish Opera and Manchester International Festival, Artistic Director of Chichester Festival Theatre, Executive Director of Nottingham Playhouse and Consultant Dramaturg to the Vienna Festival.

The fellowship was awarded to Ms Mackenzie at a Queen Mary Graduation Ceremony on 16 July 2013 in recognition of the impact the Olympiad and Festival had on the east London community and also as an acknowledgement of her role as a supporter of Queen Mary’s Professor of Drama and Performance, Paul Heritage, and the work of the People’s Palace Projects which he directs.

People’s Palace Projects - an independent arts charity based at Queen Mary, which promotes the practice and understanding of art for social justice - curated a 30-day cultural event called Rio Occupation London which was saw 30 of Rio de Janeiro’s most vibrant artists take part in performances across the city during the London 2012 Festival.

Commenting about the  work of the People's Palace Projects Ms Mackenzie said: "What I love about the work that you see in Rio Occupation London is that this is not stereotypical work ... This is very contemporary, it's very subtle, it's very radical. This is the next generation of great art and it's lovely to feel that we are seeing it first."