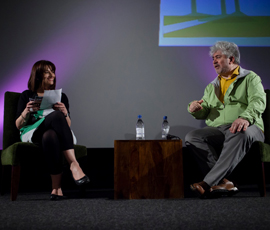 Professor Delgado has known Almodóvar, who is arguably the most successful and internationally known Spanish filmmaker of his generation, for 20 years. She recently conducted a Q&A with him for the UK premiere of his film at the Hackney Picturehouse, which was broadcast live across 42 cinemas reaching approximately 4,000 spectators in the UK.

Whilst Almodóvar has been promoting the movie, a comedy that brings together a group of characters cocooned in the Business Class cabin of fictional airline making its way from Madrid’s Barajas Airport to Mexico City, Professor Delgado briefed producers and helped him prepare for his interview on the The Graham Norton Show which was aired on BBC One on Friday 26 April. He appeared to promote his film alongside F1 driver Lewis Hamilton, comedian Dara Ó Briain, and singer Alison Moyet.

On Saturday 27 April, she conducted another Q&A with two of the actors of I’m so Excited at a special preview at the Cine Lumiere as part of the London Spanish Film Festival's Spring Weekend.

Professor Delgado added: “It's been fascinating finding out about the creative genesis of I'm so Excited! I've gained an enhanced understanding of his working process and especially his work with actors."

Dr Lucy Bolton, teaching fellow of Film Studies at Queen Mary, has also reviewed the film. Her critique will appear in the Time Higher Education on 2 May 2013.

An interview of Professor Delgado talking with Almodóvar has just been posted on the BAFTA website.

The Complete University Guide published today (29 March 2013) has rated Queen Mary’s Drama Department as the best in the UK with a score of 100/100.