British stardom is on the ascendency with many actors gaining critical acclaim starring in hit US television series and Hollywood blockbusters. 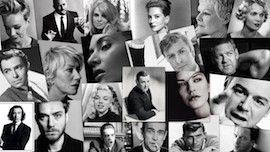 Now a groundbreaking conference is bringing together scholars to reflect on the long history of British stardom from the silent era to WWII, the 1960s and up to the present day.

Dr Bolton, a lecturer in Film Studies at Queen Mary, said: “British stardom is a hugely important aspect of British film but very little is written about it and it has a relatively low profile. We want to change that and that’s why we are hosting this event.”

The conference at Queen Mary’s Mile End campus runs from 1-2 November and will examine a variety of past and present stars from Julie Christine and Sean Connery to James Mason, Deborah Kerr and Kenneth Branagh.  As well as more recent stars such as Damien Lewis and Idris Elba.

He added: “Many British actors are currently being used in Hollywood, but is it their superior talent? Actors say it’s because they are cheap. Is their British identity really important or is it being erased as many are playing Americans? These are the kind of questions we will explore.”

As well as hosting a number of debates and panel discussions, there will be a screening of an episode of The Trip, the 2010 BBC Series starring Steve Coogan and Rob Brydon as part of the Michael Winterbottom season running over the next few weeks at Queen Mary.

Following the conference organisers will produce a special issue of a journal on British Cinema and Television stardom to be published in 2014.

Listen to a podcast about British Stardom with the event organisers.